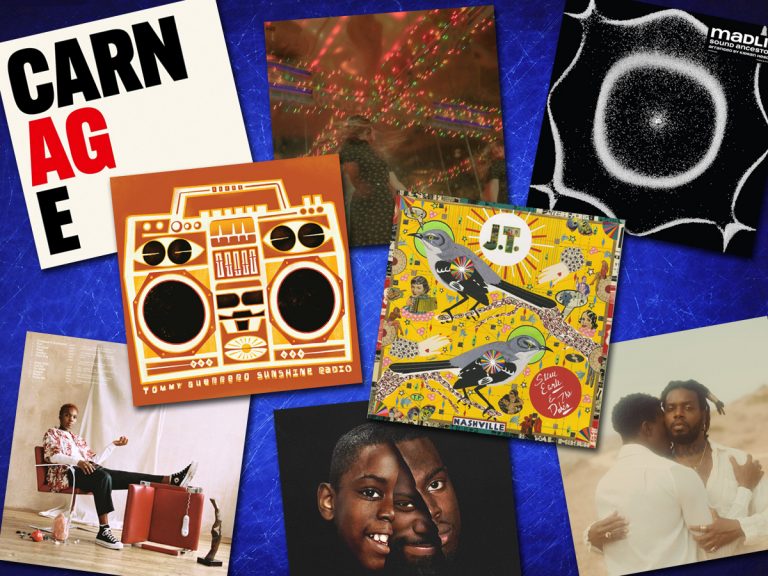 It may have been a year of bad news, but 2021 was nonetheless also a year of great music. The staff of PAN M 360 looked back over the many releases of 2021 and have chosen the hundred best. Our rundown, in five parts over five days, starts with the releases from the year’s first quarter.

Justin Townes Earle died in August 2020 from an overdose of cocaine laced with fentanyl. On J.T., Steve Earle pays tribute to his late descendant. Eleven tracks, ten of which were written and composed by Justin Townes. “Last Words”, the final cut, comes from Steve Earle: “I was there when you were born / Your mother held you and then I was there (…) / When you died I wished I was there / To hold you like that.” Steve Earle has been building a cathedral of Americana for some 40 years. But he certainly wasn’t planning to hold his son’s funeral there. (Luc Marchessault)

Arlo Parks was only 20 years old when Collapse in Sunbeam was released in January. An old soul! The heady blend of pop mixed with Brit soul and R&B, and standard hip-hop beatmaking, this album puts to music the poetic freshness of a personal diary in which Parks manages to extract beauty from the greatness and misery of her young existence, and the observed mores of her generation. The 12 tracks offered here by this child of African immigration to the United Kingdom stand out essentially for their lyrics and song constructions accompanied by melodic hooks essential to pop success. Fresh, sensitive, creative, intelligent. (Alain Brunet)

This post-punk five-piece from South London, UK may have gained recognition for their fantastic debut Songs of Praise, but their follow-up, Drunk Tank Pink, is also a marvel. Filled with frenetic guitars, anxious lyrics, and sonic uncertainty it puts its listener through the wringer. These guys are only in their 20s, but they play like they’ve lived generations. (Stephan Boissonneault)

Montreal’s de facto indie experimental psych band, The Besnard Lakes, are old hats at making invigorating songs that touch every nerve and none of their releases ever lose their luster. However, their latest is one for the ages. Up there with …Are the Dark Horse, the harmonies ooze style, the synths dance, baroque pop crescendos, and post-rock guitar layering spar with each other. It’s an album where you will discover something new after the 50th time you’ve listened to it. (Stephan Boissonneault)

Released at the turn of 2021, Normal de l’Est has stood up to all competition and finally elevated Connaisseur Ticaso to the rank of Montreal’s best MC. For eminently systemic reasons, Steve Casimir (real name) took a generation to achieve this legitimate recognition. Normal de l’Est is a journey and the street a permanent lookout for this eloquent, intelligent, paradoxical Afro-Urban chronicler. Coordinated by the inescapable Ruffsound, the beatmaking is worthy of the best atmospheres of a noir series, all of which is fleshed out by a wide spread of guest producers and rappers. The Felix Award in the Rap category at ADISQ 2021 is well deserved. (Alain Brunet)

Werewolves
What a Time to Be Alive
Prosthetic

If you’re in the mood for a good dose of ultra-fast death metal, Werewolves’ second album is for you. The band members, who also play with Psycroptic, The Antichrist Imperium, and The Bezerker, remain on familiar ground with this new musical entity: velocity, black metal influences, grind and a touch of industrial. The trio’s stated aim in creating What a Time To Be Alive was to inject as much hate into each track as there is in the current zeitgeist. That pretty much says it all. (Christine Fortier)

Tommy Guerrero first made a name for himself in the 1980s as a pioneering street-style skater with the Bones Brigade. In the late ’90s, he began a rich body of musical work, exploring the trends of the day. His marked evolution towards retro-flavoured funk, with a good measure of tropicalia in his most recent output, culminates in this album, on which he played almost all the parts. Sunshine Radio is an improved follow-up to his excellent previous album, Road to Nowhere. Perfect for taking it easy, and dreaming of sunshine. (Patrice Caron)

The young London band Black Country, New Road aren’t afraid of improbable mixtures and find a cohesion in them: post-punk, post-rock, crimson prog, noise, polka-rock, contemporary music of European origin, American minimalism, free jazz and other herbs simmer in the same pot. The strangled voice, the tragi-comic tone and the hyper-realistic narratives of frontman Isaac Wood, a very good guitarist by the way, do not go unnoticed. These bursts of words punctuate a great stylistic diversity and different levels of musical intensity, sometimes thoughtful, sometimes wild, a kind of attitude that is both punk and savant. This is one of the many signs of the rock resurgence in 2021. (Alain Brunet)

Pandemic considered, Nick Cave did not require the services of his Bad Seeds to give life to his new compositions. He turned to his old pal Warren Ellis, bad seed in chief since Mick Harvey’s departure. The dark pair, as inspired as ever, have put together an album made up of poignant ballads (“Albuquerque”, ”Lavender Fields”) and more menacing tracks (“Hand of God”, “White Elephant”), over which the shadow of Arthur, the son the Australian bard lost in a tragic accident, still hangs. (Steve Naud)

At 39 minutes, the Swedish collective’s second EP might as well be considered a full-length album. Sinuous, introspective melodies, passionate build-ups and hypnotic rhythms intertwine to form an engaging and highly satisfying musical journey. Cult of Luna allow themselves a stylistic digression with the song “Inside of a Dream”, a sort of lament narrated by Mark Lanegan (Screaming Trees, Queens of the Stone Age). It’s not the best moment of the EP, maybe because this song is so different from the rest, but if Cult of Luna is happy, that’s what counts. (Christine Fortier)

After her self-titled album as The Weather Station, Tamara Lindeman had a pretty quiet few years in 2019 and 2020. She was developing a new sound, using her stream-of-consciousness lyrical style as commentary on the world around her. She emerged in 2021 with an indie jazz band backing her on Ignorance and the result is gorgeous. Some of the tracks, like “Robber,” and “Tried To Tell You,” are compositionally some of her best work to date. (Stephan Boissonneault)

Sound Ancestors is a powerful bicephalic beast, with hip-hop as one head, that of the renowned Otis Jackson Jr., alias Madlib, and the other being the fine electro embodied by Kieran Hebdan, alias Four Tet. On the programme, a superb integrated mix of hip-hop beatmaking, post-IDM productions, free jazz, post-Sun Ra cosmic jazz, jazz-funk, R&B, flamenco nuevo, Jamaican dancehall, chamber music for strings and kalimba, West African music including balafons, and more. This 16-track fresco is the result of contemporary processes: integration and modification of pre-existing recordings, new studio sessions and a hybrid aesthetic. (Alain Brunet)

This classically trained pianist has taken up techno music and the result is more than successful. Originally from Bulgaria, this musician has released IV on a Moscow label. This album is a dish concocted with techno ingredients based on a shattering beat, rolling kick, hi-hat, echoes and reverbs, with a hint of synth notes. There is also a small nod to French cinema in the title “Se leurrer”. Kameliia should be in your Christmas and New Year’s music selection. (Salima Bouaraour)

Grime aficionados have known the experienced Ghetts since 2010, when the East London scene enshrined him among its own. Eleven years on, anyone with an appreciation of Afro-British culture must absorb his hyper-realistic and relevant narratives, reminiscent of a difficult immigrant existence rife with psychological deficiencies, economic hardship, delinquency and crime. One must bow to this refinement of grime style through a quasi-symphonic orchestral approach, originally based on English electronic styles of Afro-Caribbean descent (dub, jungle, drum & bass, dubstep) and now mixed with R&B, jazz, chamber music of Western classical tradition, choral singing and even John Barry soundtracks. (Alain Brunet)

Artistes variés
Strangers In Their Own World
MFC

BitterCaress, the project’s initiator, brings together five producers that fans of underground parties in Toronto and Montreal already know well for their ability to get their feet moving. The invited artists have composed their productions around the theme of strangers in their own world, and explore societal issues such as isolation (“Oracle Opium”, by Aahan), mental health (“La Morte d’Alex”, by Alexa Borzyk), police violence (“Brain to body”, by Inside Blur), homelessness (KORVN’s “Street Strangers”) and a better future (“Vision Of Tomorrow”, by ottoman.grüw). All of them deliver nuggets of hard, raw, cold and fast techno. (Elsa Fortant)

A discoverer of treasures and a discreet enthusiast, Elinor Frey has been making a brilliant contribution to the development of the early cello repertoire for several years now, thanks to her studious research in the hallowed halls of libraries throughout Europe. Here it is a certain Antonio Vandini, contemporary and perhaps friend of Vivaldi, whom she attempts to resurrect by offering us his music, both playful and serious, a rarity in 18th century Italy. (Frédéric Cardin)

When Louisiana’s Renée Reed sings with her plaintive voice and strums her guitar languidly, it’s like hearing an old soul. Perhaps this is due to the transmission of an ancestral musical knowledge: she’s the granddaughter of accordionists Harry Trahan and Bob Reed, the great-niece of folklorist, musician and teacher Revon Reed, and the daughter of multi-instrumentalist Lisa Trahan and fiddler and bassist Mitch Reed. Sung in English and French, the pieces evoke the oneiric and remind us of Jessica Pratt’s dream-folk. A bewitching first album. (Isabelle Marceau)

The full title of this album is Music for Piano With Slow Sweep Pure Wave Oscillators XL. The work was first performed in 1992 in a 15-minute version, but the 2020 “XL” version, the one on this recording, offers 64 minutes of meditative, immersive and spectral music. The piano is in constant resonance with the two oscillators that emit waves sweeping across four octaves. This is one of the best excerpts from the composer’s catalogue of piano works, which died on 1 December 2021. (Réjean Beaucage)

A herald of free jazz in the 1960s and a protégé of the great John Coltrane, the venerable saxophonist Pharoah Sanders is still on fire. After hearing a record by England’s Sam Shepherd, who creates electronic music under the moniker Floating Points, he expressed a desire to collaborate with him. Hence this meeting at the crest of the Milky Way, magnified by the strings of the London Symphony Orchestra. This marriage between styles and generations is dominated by the ever sumptuous breath of the Pharaoh. (Steve Naud)

Everyday love, casual contact, happiness and sorrow, the expression of desir, the refuge of the intimate cocoon. Josiah Wise, aka Serpentwithfeet, fully assumes his gay identity and contributes to the construction of the African-American LGBT identity, by crafting these 11 generally beautiful songs. The gospel antecedents are clearly discernible in this music, which is nevertheless adapted to the hybrid instrumentation of our time. His high countertenor and light tenor range are perfectly suited to his aesthetic, exploratory enough to conclude with a strong personality in realization, friendly enough to federate fans of soul-gospel melodies the least bit open to the formal advances of pop culture. (Alain Brunet)