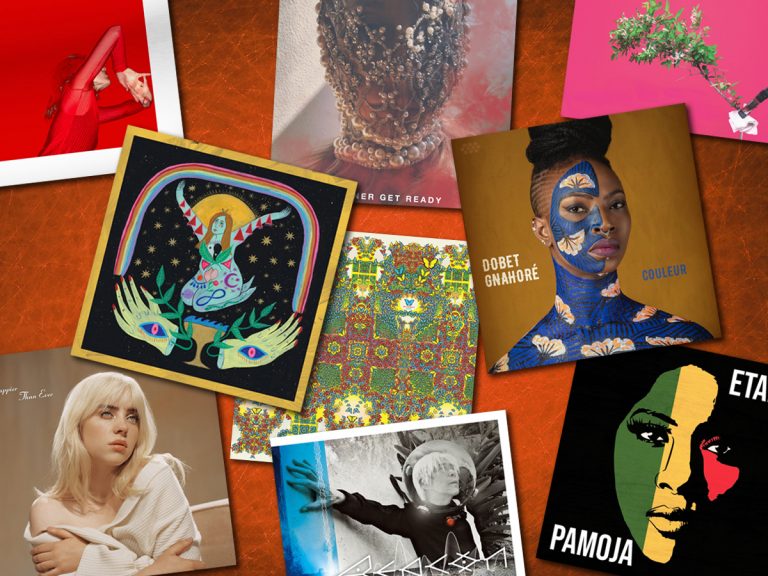 PAN M 360’s rundown of the hundred best music releases of 2021, in five parts over five days, continues with further titles, these ones released between June and August.

Billie Eilish
Happier Than Ever
Interscope

The colourful pop sensation and Gen Z icon, who shifts from the whispery to the airy, once again wrote this album with her brother Finneas in his basement. With two Grammys in 2021, including one for “No Time to Die” (the theme song to the latest James Bond film), and a plethora of prestigious awards on both sides of the big pond in 2020, Eilish is establishing herself as one of the must-see artists of this new decade. Major. (Claude André)

Couleur is an ode to women, a praising of the French-speaking world, a love letter to motherhood, a celebration of African music… But above all, an excellent album! Dobet Gnahoré offers us a tour de force that contains a little something for everyone. Those who love Afro-pop will find something to their liking in the bewitching rhythms of the African diva. Those who want to broaden their horizons will discover a whole new and exciting musical world. Those who want to dance will be able to dance until the wee hours of the morning! (Louis Garneau-Pilon)

The singer Etana released the self-produced album Gemini in 2020. Already back this year with Pamoja, which means “together” in Swahili, the Jamaican has surrounded herself with a number of artists on the album, mostly from the African continent. The album also features Vybz Kartel, Damian “Junior Gong” Marley and Europeans Alborosie and Patrice. In terms of rhythms, she has drawn on Afrobeat, dancehall and, of course, the roots-reggae to which she has accustomed us since her debut. Rich in influences, masterfully produced and interpreted by one of the major singers of the current scene, Pamoja marks a great coup in 2021. (Richard Lafrance)

More than an extraordinary guitarist or a crazy composer, René Lussier is a sound researcher. Except for the double bass quartet (4 times Hugo Blouin) that can be heard in Le clou (1999), it’s Lussier who plays everything, including “a whole lot of homemade percussion made of rubbing, mouth noises, cake spatulas, barbecue spits and Styrofoam on a wet window,” not to mention, of course, the daxophone and the guitars. A good vintage! (Réjean Beaucage)

After studying in Jerusalem and Paris, Ofer Pelz obtained a doctorate in composition at the University of Montreal. He uses different working methods, such as exploring the concept of “unstable repetition”, reverse engineering and ways of composing that are inspired by mathematics or derived from electroacoustics (logarithmic spiral, accumulation of loops, etc.). The Meitar ensemble is based in Tel Aviv, but this record nevertheless offers several opportunities to hear, albeit on tape, “the sound of Montreal”. (Réjean Beaucage)

It’s sometimes hard to find inspiration for a first album. Finding inspiration for the 18th is probably just as difficult. However, the prolific septet King Gizzard and the Lizard Wizard succeeded in doing just that. They abandon somewhat the intensity of prog-rock in favour of dream-pop-style synth loops. The result is amazing. The lyrics have also evolved from the whimsical stories of the past to the ambiguous world of dreams. Butterfly 3000 is perhaps an unexpected diversions for the Australian prog sensation. But as a band that specialises in unexpected detours, this one is well worth the effort. (Louis Garneau-Pilon)

After two EPs and numerous singles, the Brit Greentea Peng arrives with Man Made, a surprisingly cohesive first album. Daughter of an Arab actor father and an African mother, Aria Wells (her real name) and her band The Seng Seng Family offer 18 tracks of lascivious neo-soul, largely coloured with psychedelia, R&B, dub, funk, acid jazz, bhangra, trip-hop and hip-hop influences that support lyrics with strong sociopolitical contours, even if they are sometimes a bit naive. If her style reminds one slightly of Lily Allen or Erykah Badu, the comparisons stop there, the Londoner’s doing a definite thing of her own. (Patrick Baillargeon)

After the grand success of Leenalchi, another South Korean act modernizing deep and formalized local traditions is the Seoul-based duo Haepaary (a wider view aligns them with the similarly mystical Kuunatic from Japan, and Prairie WWWW from Taiwan). The pair practice a sort of subversive, ritualistic electro-Confucianism, revisiting royal temple music of the Joseon dynasty, and the two women counter patriarchy as well, exploring the traditionally masculine vocal genre called namchang gagok. The results are mesmerizing, even deeply haunting. (Rupert Bottenberg)

With Regulus, Hélène Barbier has modestly established herself as the queen of lo-fi avant-pop. On this second solo album, which she made quite alone at home (pandemic and all), the French singer and multi-instrumentalist, exiled in Montreal for the last ten years, creates an intimate universe, populated with small, deceptively approximate songs, between soft no-wave and minimalist post-punk, an engaging and original music with a crazy charm. Regulus is the work of an ingenious and inventive creator who is not afraid of taking risks. (Patrick Baillargeon)

Here we have a clear case of synergy—Ouri and Helena Deland are inspired by the nun Hildegarde von Bingen, a rare woman of letters in the Middle Ages, composer, artist, and high mystic. The Montrealers are elevated beyond their individual achievements in electro and indie-folk-pop, which are highly commendable by the way. The song forms are deconstructed to perfection, the vocal melodies and texts are at the service of works constructed like electronic or instrumental pieces, the arrangements, treatments and transmutations of the sources (voices, instruments, keyboards, strings, sounds) show an uncommon finesse. (Alain Brunet)

Path of Wellness is the tenth work by this band, which recently switched from a trio to a duo after the departure of the hard-hitting drummer Janet Weiss. Guitarists and singers Corin Tucker and Carrie Brownstein produced the new album themselves. The rhythmic aesthetic of Janet Weiss is continued here by three drummers who take turns playing efficiently. There’s nothing unusual about Path of Wellness, not much that doesn’t fit S-K’s modus operandi. Apart from the keyboards that grace several pieces. But with these women from Olympia, Washington, even the ordinary is Olympian. (Luc Marchessault)

The Flemish band, which has been active since 1999, presents a delectable album this year. In full control of their means, they catapult the listener into a space where gravity reigns. Despite the extreme heaviness that characterises their aesthetics, the pieces breathe—the atmospheres are carefully set up, and Colin H. Van Eeckhout’s primal scream gives the full measure of the suffering. It’s sometimes joined by the singing of Caro Tanghe (Oathbreaker), instilling bits of hope. We understand that this pain is not a simple complaint, but a catharsis, as serious as the thorn, the title of the album. (Geneviève Gendreau)

After a debut album in 2010 and an EP in 2013, Anika didn’t release anything under her own name (preferring to join other artists, notably the Mexican band Exploded View), until Change, released during the summer. With her cool beauty, Nico-esque phrasing and mechanical art-pop songs, Annika Henderson has had no trouble (re)winning over an audience with more avant-garde tastes. Co-produced by her and Exploded View’s Martin Thulin, Change sees the German-British singer create her own songs, whereas almost all the tracks on her first effort were covers. Change also takes Anika off the neo-dub path and a little closer to krautrock and post-rock, while still remaining bold, experimental and very elegant. (Patrick Baillargeon)

Solid Gold was released a few months after U-Roy’s death and features several impressive new collaborations with both heavyweights and newcomers. The album reconfirms the relevance of Daddy U-Roy with his covers of Jamaican classics, including the surprising “Man Next Door” with Santigold, and “Stop That Train” with Rygin King. Big Youth offers a convincing re-reading of “Every Knee Shall Bow” and Richie Spice, a “Wear You to The Ball” that would have satisfied even Duke Reid… Ziggy Marley offers an energised version of “Trenchtown Rock” and Shaggy accompanies the doyen DJ in an assureds old-school style on “Rule The Nation”. (Ricahrd Lafrance)

Arjun Vagale has remained silent for a few years in order to devote himself to the creation of his label and his project Asymetrik. These are two completely separate stylistic entities. Vagale has created five tracks of hypnotic dub techno. As you listen, you slip peacefully into the charming darkness of “Scatter Dos”, after having stomped hard on “Time Cop”. “Sustain Sequence”, ephemeral and bewitching, leaves you on a tart note, energetically asking for more. (Salima Bouaraour)

Cruelly overlooked in the northern hemisphere, Rodrigo Amarante is well known in his native Brazil, where he was a member of Los Hermanos, an indie rock band famous enough to fill stadiums. Having made his home in the United States, he now records solo albums that are gems of inventiveness and finesse. His latest, Drama, subtly blends folk, rock, samba and bossa nova. With his smooth, comforting voice, he sings in English and Portuguese about the big questions of life, without ever taking himself too seriously. (Steve Naud)

With Antichthon, Giri explores the theme of the cosmos and space travel. Antichthon is the planet that could be home to mankind as it leaves Earth. The scientific team of the Discovery Behind The Sun mission travels on board the Cyrillia. On the way, they come across a sister ship with a team from Antichthon on board, heading for what appears to be their future home: Earth. Dream or reality? In the manner of a science fiction story, the tension is built up both on the micro scale of a room and the macro scale of the album. It is clear that Giri is an excellent storyteller. (Elsa Fortant)

Released on the label that Emma-Jean Thackray created, Yellow offers a rich, organic, studio-recorded sound. Perhaps it could be categorized as “light music” thanks to particularly catchy tracks like “Say Something”? One thing is certain, Yellow is more accessible than Um Yang, her previous EP (2020), which played in the free-jazz court. The fourteen compositions call upon names like J Dilla or Fela Kuti. An Afrobeat lover, the bandleader borrows her kick-hi-hat-snare rhythmic patterns from house, which gives her work an unstoppable groove. (Elsa Fortant)

The hard dialectic of Sinner Get Readyis fairly comparable to that seen in her previous recordings: entanglement, clashing, collision, tearing, suturing, symbiosis. Her recent allegations of assault by Alexis Marshall of the band Daughters, with whom she had an affair, add density to the states evoked in this excellent album. Lingua Ignota (“unknown language”) marries the sacred music and folklore of Europe and America, Appalachian song, choral singing, that beautiful contralto voice. With this bonus: the silkier, softer portion of her expression has never reached such heights. (Alain Brunet)

An icon of adventurous techno-pop in 1980s Japan, Susumu Hirasawa is best known for his unforgettable later work scoring films by the late anime master Satoshi Kon. Blending anthemic earnestness and a streak of ironic, deadpan humour, Hirasawa’s sensibility has remained firmly intact over the decades. On his 14th solo album, his familiar melodic stylings, operatic grandeur and flights of falsetto are ever present, as is his strange yet alluring juxtaposition of martial force, playful absurdity, guileless emoting and disconcertingly unfamiliar electronic sounds. The most vital factor is the sense of sympathy and optimism Hirasawa never fails to project, forever the light cutting through darkness that the album’s title suggests. (Rupert Bottenberg)