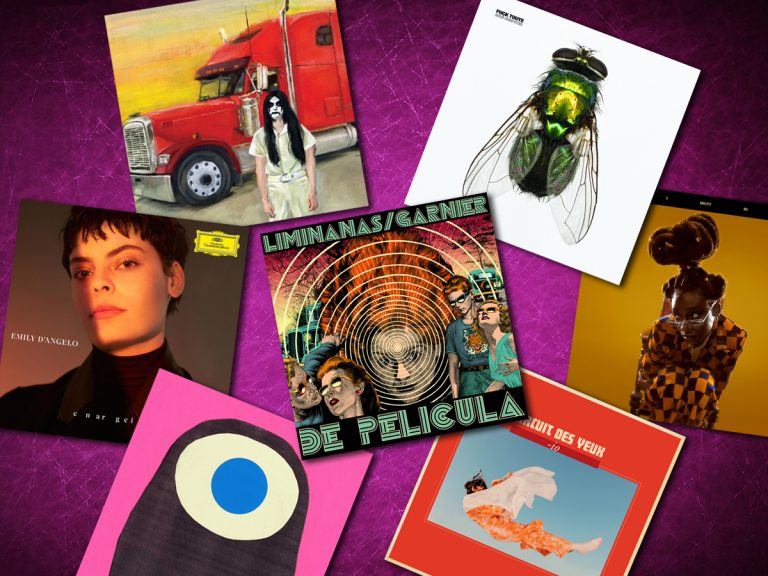 French couple Lionel and Marie Limiñana pastiche a certain dark, transatlantic psych vibe, summoning the shadows that lingered after the Summer of Love with dope-stunned drones and dissolute poetry. De Películas finds them partnered with Laurent Garnier, a veteran of 1980s Manchester and a titan of the French Touch scene. Thus are the pneumatic, propulsive grooves assured. Built for comfort, not for speed, they carry The Limiñanas’ luminous organ grind and raspy raconteur routines with grace. Bonus: Edi Pistolas of legendary Latin dance-punks Pánico, whose snakebite delivery adds hot sauce to the grand, swaggering “Que Calor !”. (Rupert Bottenberg)

The ballad “SECRET” sets the tone for Pictura de Ipse : musique directe—Hubert switches to the confidential, the guitars have taken over, keyboards, synths and programming reign, funk-like atmospheres dominate. This album, which Hubert produced himself, is in many ways a tribute to Prince, as spectacularly illustrated by “FOURQUARTS”. To summarize, Lenoir dumped neo-glam, went to Flying Lotus, Mac Miller, Thundercat, Frank Ocean and his highness Prince, and then came up with the most daring and successful Quebec album of 2021. (Luc Marchessault)

It’s probably harder to make music as a band these days, so the co-founder of Conventum put together a virtual ensemble (guitars, bass, programming [sax and drums]). Then he had fun doing it all himself: recording, editing, mixing, etc. The results are amazing, and amazing to hear. The sounds are astonishing, and there are colours of the protean musique actuelle of the ’70s and ’80s, when Conventum resembled Henry Cow (or vice versa), but with a dose of DIY that makes the music sway. (Réjean Beaucage)

Deutsch Nepal’s releases are rare. The current album is the third part of the Dystopian Partycollection series, the first two of which date from 2008 and 2016. This time it’s a compilation of tracks, covers and alternative versions composed between 2012 and 2021, and on which some collaborators intervene. Unpretentious, then. The whole is less uniform than his albums, but the magic still works. Happy inclusions are the vocal imprecations of Peter Andersson, the surprising presence of the Italian guitarist Alessio Betterelli (“How Low…”) and the icy rhythms of Geoffrey Delacroix, alias Dernière Volonté (“Amanda Lear”). (Geneviève Gendreau)

Tasha
Tell Me What You Miss the Most
Father/Daughter Records

On Tell Me What You Miss the Most, her second album, Tasha sings that she would stay in bed all day if she could. Her slow, fluffy drums and lightly saturated guitar summon both sweetness and melancholy. Her flute, strings, celestial voice, a slight echo and evocative titles (“Burton Island”, “Lake Superior”) form a warm envelope. Simplicity stirs feelings when expressed well. It’s a necessary break that she offers here, between the sky and the earth, the tumult of grey days and the noise of the city, for a more beautiful winter. (Anne-Sophie Rasolo)

A prolific musician at only 27, it’s safe to assume that Texan Hayden Pedigo’s fame and influence will continue to grow. Letting Go features blue skies, an abandoned ranch and high Texas plains that stretch as far as the eye can see. Alternating between a six-string and a twelve-string, the acoustic guitar is played in the primitive American style, and Pedigo handles the rhythms perfectly, as a storyteller would. The pieces evoke vivid, fundamental emotions, making Letting Go a gripping listen. (Isabelle Marceau)

Little Simz
Sometimes I Might Be Introvert
Age 101 – AWAL

If you’re looking for the definition of an artist, fulfilled, radiant, putting her beauty and intelligence at the service of the concept of the powerful woman, capable of giving off both strength and sweetness in one go and of laying down her committed lyrics with genius, you’ll find it in Little Simz. My dear colleague and friend Alain Brunet has already reviewed this album and I follow him all the way. I put this queen on my list because she exudes incredible maturity and undeniable talent. Her exceptional personality comes through in her voice, regardless of the styles of her albums. For me, the image and symbols they convey honour all women in this world. (Salima Bouaraour)

Is it possible for the same singer to perform both baritone and tenor roles? Michael Spyres is the exception to this separation of voices. Originally a baritone, Spyres has spent many years perfecting his voice to expand his vocal range. The result is astonishing; one is amazed at the ease with which he takes on the vocal garb of different characters and alternates between bel cantiste high notes and sonorous Verdian lows. Accompanied by Marko Letonja and the Strasbourg Philharmonic Orchestra, nothing sounds forced and the grain of the voice remains stable and percussive in the performance. (Alexandre Villemaire)

The Witness explores new avenues for Suuns, with the inclusion of acoustic, wind and string instruments, superb, almost jazz arrangements punctuating the hybridizations between avant-rock, electronic and experimental aesthetics, to which Suuns have accustomed us since 2010. The Witness poetically addresses various angles of our globalized voyeurism, planetary facts and gestures simultaneously observed on a daily basis by millions of humans. There is an added value in a congruent portion of the arrangements and execution on this album, which is certainly one of the best vintages from this extraordinary band, still one of the most important on the Montreal scene. (Alain Brunet)

In 2018, the band Low confused many with the release of Double Negative, an album on which they exploded their song structures with distortion and electronic assaults. Overwhelmed by the radical approach, bassist Steve Garrington left the band, which was reduced to the pairing of Alan Sparhawk and Mimi Parker. The duo’s comforting vocal harmonies now make their way through a cloud of discordant noise and show us that amidst the chaos, the lights of humanism still manage to shine. (Steve Naud)

This is music that is atmospheric, to say the least. In the eleven-minute final movement, which gives the record its title, one can almost hear the voice—or the solo instrument—rising above what would then be a magnificent backdrop. It’s quite a power to let us hear what isn’t there, and that’s what develops over the course of this programme, which is based on a certain form of voluntary simplicity. (Réjean Beaucage)

The Danish band’s third record is, according to the accompanying release, a thunderous sonic tale of how technology, in combination with certain power structures, transforms humanity and affects human values. This description makes sense of the darkness that emanates from Unmaker’s post-metal sludge swirls. A meditative record that you can listen to over and over again. Matt McCachy, singer of the Montreal band Cryptopsy, guests on the song “Desecrator”.  (Christine Fortier)

Mezzo-soprano Emily D’Angelo’s daring debut album pushes the envelope with an eclectic programme that mixes medieval works with electro-indie rock and pieces by 21st-century female composers. The “augmented” works of Hildegard von Bingen rub shoulders with the low, soaring pieces of Hildur Guðnadóttir, the percussive and lyrical tunes of Missy Mazoli and the poignant excerpts from Sarah Kirkland Snider’s Penelope cycle, of which the memorable “The Lotus Eaters” is a highlight, with its effective and engaging rock passage of electric guitar and drums, to which D’Angelo’s clear, low tone is surprisingly grafted. A shocking album from a young lyrical artist who turns the canon associated with classical singers on its head. And that’s just as well! (Alexandre Villemaire)

Here’s Troie (Troy), whose title refers to the famous horse, except that instead of hiding a commando of Greek warriors, it reserves for the music lover a dozen beautiful electro-soul tracks c/o Malik Djoudi. Their common denominator lies in the sweetness they exude, to varying degrees, without it ever being too much. It must be said that Djoudi sings high, always right, with a voice that acts like a non-steroidal anti-inflammatory ointment. Duets with the rapper Lala &ce, sacred monster Isabelle Adjani and Philippe Katerine, who personifies the title character of the twisted nursery rhyme “Eric”. So we smile briefly before “Petit héros”, the melancholic finale to an otherwise invigorating album. (Luc Marchessault)

It starts with “Gelé su’l feu”, a tribal riff with Arabic tendencies, big drums that hammer out a nasty beat, a guttural voice that would scare an ear doctor, and it goes on for 36 and a half minutes, until the last note of “Persona”. We are dealing with skilful practitioners in whom harmonic rigour takes precedence, with musicians who alternate genres and tempos without a hitch. On this second full-length opus, Fuck Toute edify the listener with their musical and lyrical cohesion. The band that is now at the confluence of punk, metal and Quebecois noise is called Fuck Toute, let’s face it. (Luc Marchessault)

Haley Fohr, better known by the name of her main project Circuit des Yeux, is a singer-songwriter with a four-octave vocal range. From her lo-fi beginnings of accompanying herself on twelve-string guitar and releasing dark experimental albums, her compositions have become more melodic and dramatic. The album -io presents powerful pieces with orchestral support that can match her voice. It’s her most accomplished album. (Isabelle Marceau)

Marissa Nadler
The Path of the Clouds
Sacred Bones

Dark dream-folk ballads make up this ninth album, conceived during the pandemic and produced by Nadler. During quarantine, she watched reruns of episodes of Unsolved Mysteries intensively; the sordid and fantastic stories served as inspiration for the lyrics. This forced isolation also prompted her to learn to play the piano, which she used in an exploratory way on the album. She was able to count on the following (remote) collaborators: harpist Mary Lattimore, guitarist Emma Ruth Rundle, keyboardist Jesse Chandler (Mercury Rev) and Simon Raymonde, ex-bassist of the Cocteau Twins. (Isabelle Marceau)

Violinist Andrew Wan and pianist Charles Richard-Hamelin conclude, in imperial fashion, their series of Beethoven’s complete violin and piano sonatas, begun in 2018. United in a synergistic expression of playing, the striking duo delivers a coherent interpretation of the multiple dynamics and nuances of Beethoven’s sonatas. From the fine, richly textured piano writing of the fourth sonata, through the virtuosic musical competition of the ninth, to the lyrical and biting harmonic textures of the tenth, the two performers deliver a deft and sensitive performance of great musicality. (Alexandre Villemaire)

At the helm of Vanishing Twin is the farsighted multi-instrumentalist Cathy Lucas, and it’s to her credit as captain of the ship that something so multifarious should also be satisfyingly cohesive. Stereolab are the most obvious reference point, but other delicious ingredients that constitute the band’s excellent second album include low-gravity tropical space disco, elegant Ellingtonian exotica, celestial harmonies and unusually refined lyric-writing. That every second phrase concludes with a question mark is in keeping with the insatiable curiosity that clearly propels the auditory adventures of Vanishing Twin. (Rupert Bottenberg)

One third of the Afrocentric and highly experimental samba-punk unit Metá Metá, São Paulo singer and songwriter Juçara Marçal steps out with a solo album that’s perhaps a bit more accessible, but no less inventive and inspired–and though it never mentions the execrable Bolsonaro by name, it carries a compelling if unspoken political energy. Francophone listeners will appreciate the rough, raw reinterpretation of “La femme à Barbe” by the great Brigitte Fontaine, France’s feminine equivalent of Serge Gainsbourg. (Rupert Bottenberg)