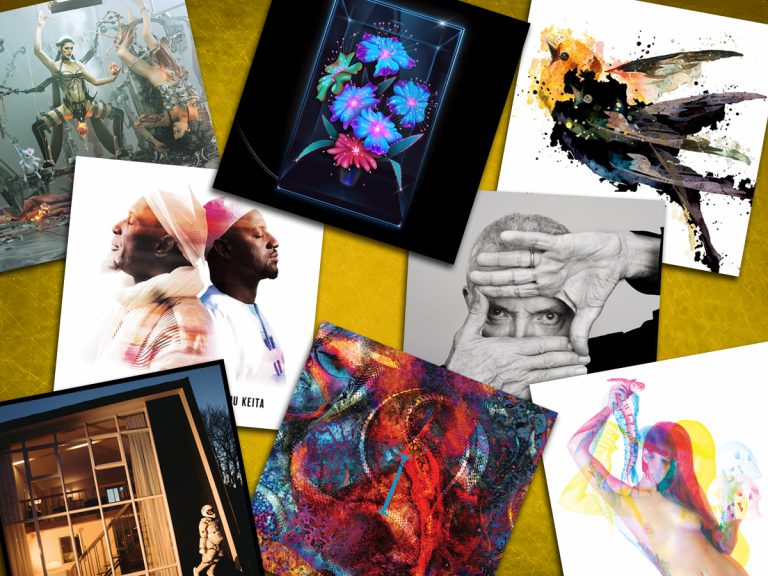 PAN M 360’s rundown of the hundred best music releases of 2021, in five parts over five days, wraps up with a final 20 top releases, from the last months of the year.

Warning, instant crush. Right away, the album opens with “Fille de joie”, a piece that sets the scene for the character that is La Zarra. The juxtaposition of a contralto and tragic voice with a melancholic message and a music that evokes big movie productions with its strings and jerky beats. The character imposes herself. From the outset, it is a question of choosing to believe or not. Let’s go for the first option. Bang! (Claude André)

Chelsea Wolfe joins Converge again, the purpose being to shed some ambient light on the band’s approach, renowned for the complexity and high mathcore virtuosity of its proposals. However, here, the focus is on playing and singing at medium or slow tempos, things necessarily become more melodic, the ambiences softer than bitter. We are here in an ideal context, where the depth of a concept, the animality, the sensuality, the heaviness, the doom metal saturation, the dripping guitars, the post-rock and post-prog influences, the virtuosity of the execution all meet. (Alain Brunet)

The band that wore surgical masks before it was fashionable delivered what may well be the most positive, and perhaps most pop and electronic record in their catalogue last October. In a nutshell, Clinic have gone disco funky, expanding their sonic palette with the addition of several new gadgets and wacky instruments. This ninth effort from the Liverpool outfit, now a duo, blends influences as disparate as The Human League, Fun Boy Three, Kid Creole and The Coconuts, cosmic Italian disco, the Memphis Jug Band and old blues into a cohesive, groovy and always menacing whole. (Patrick Baillargeon)

From Alexisonfire and Gallows fame, Wade MacNeil has created a psychedelic rock grimoire, channeling all of his insecurities, passions, and hallucinogenic experiences into one album. He’s a guy who knows exactly what he wants musically, and on his debut, he went for ’60s psych-rock meets contemporary jam-band. The album is peppered with memorable riffs, haunting sounds, and velvety vocals. (Stephan Boissonneault)

Expressing herself in Spanish and English, this brilliant mixed American generates a protein-rich blend of genres, at the crossroads of synth-pop, synthwave, avant-pop, soul/R&B, hip hop, jazz, rumba and bolero, the whole coated with an experimental touch reflected over no 14 songs and pieces. Una Rosa, the second studio opus released on Anti-, offers a furiously fragmented repertoire, whose coherence and vast musical culture can be appreciated over the course of several listenings. The compositional approach, the atypical arrangements and the emotionally charged voice make Xenia Rubinos an exceptional artist. (Alain Brunet)

Jerusalem In My Heart
Qalaq
Constellation

Who other than Lebanese-Canadian artist Radwan Ghazi Moumneh carries out these extreme mixtures of traditional/classical music from the Levant with dark ambient proposals on the borders of bruitism? The mastermind of this singular multidisciplinary approach has developed a unique language, distinct from all Middle Eastern and Western proposals, with many collaborations to support it in this case. Metaphorically, Qalaq can be seen as an emotional documentary of the violent upheavals in Beirut and the aesthetic challenges that its artists are now facing. This is the expression of deep anxiety… what the word qalaq means. (Alain Brunet)

Four years after their magnificent Transparent Waters, the Cuban pianist and the Senegalese griot are back with Suba. The excellent Venezuelan percussionist Gustavo Ovelles, a nuanced and discreet decorator, accompanies them on this album. There is such a connivance, such a quality of listening in this magical trio that you can even hear the silences between them, the restraint, the tenderness, the humanity… Suba, the title of the work, is indeed an “ode to the dawn” in Keita’s native language. Let us also mention the presence of another distinguished guest, the Brazilian cellist Jaques Morelenbaum. Highly recommended. (Ralph Boncy)

Aquaserge
The Possibility of a New Work for Aquaserge
Crammed Discs

As Joy Crookes’ album unfolds, the cover showing her in golden skin armour takes on a special meaning. Beyond the power she embodies through her words and the understated power of her voice, Crookes, at her young age, commands a certain amount of admiration. Skin is an album full of emotion and colour, with lyrics largely written by her and a cast of instrumentalists (saxophone, tuba, bass, drums) that give body to the work. This album goes beyond the current trend of London’s sweet pop singers. (Anne-Sophie Rasolo)

Trip Image can be visualized more than it can be listened to, like a colourful condensed glitch. An ardently decipherable composition. Klein, a classically trained pianist born in Frankfurt, became familiar with the German techno scene in the 1990s. The synthetic texture fizzes against a background of hallucinogenic modularity, bound by a cacophonous depth. Trip Image has an epileptic as well as an orgasmic flavour. “Taste”, “Whisper”, “Touch” and “Smell”: your senses will be in total loss. (Salima Bouaraour)

The members of the Attacca Quartet, a 2019 Grammy-winning ensemble, offer on this album a unique repertoire in its assemblage, historically on opposite sides of the spectrum, but linked by a thematic unity. With great dexterity and musicality, the performers bring together the clean lines of Glass and Pärt’s minimalist works with the harmonic richness of 16th- and 17th-century composers such as Dowland, Bennett and Gibbons. In an aesthetic that is at once meditative and full of vitality, the ensemble cements its artistic approach, which is a redefinition of the string quartet and its repertoire. (Alexandre Villemaire)

Fans of the “metaphor dealer” will be delighted and appeased by Sous un soleil énorme, his 22nd album, which will make us dance, travel, trip, dream, think and burst into tears in eleven songs, right from the first track, “Le cœur du monde”. Perhaps his best since the immense Carnet de bord in 2004. Between the intimate and the worldly, Lavilliers sways, but not always, to catchy and enveloping Argentine rhythms, where resounding brass adds touches of redemptive lyricism. (Claude André)

IDLES have been on a hot streak, releasing an album almost every year since their 2017 debut with Brutalism. 2020’s Ultra Mono was a hard one to follow up, but IDLES came back with some of the best atmospheric post-punk in a long time. Crawler is not a typical IDLES album—it’s a slow and heavy burn that makes use of discordant guitar, thundering bass and drums, and Joe Talbot’s violent pacifistic lyrics—but it feels completely cohesive right from the first track, when Talbot asks, “Are You Ready for the Storm?” (Stephan Boissonneault)

In just two albums (the other is Crave, released in 2018), a soundtrack for a series presented on Arte (H24 – 24 heures dans la vie d’une femme) and three or four EPs (some of which contain remixes of her songs by Acid Arab, Malik Djoudi and Arthur Simonini), Léonie Pernet has succeeded in circumscribing her sound identity. Her electro often tends towards the acoustic, the earth is never far away, nor the firmament. No laughing matter, “The void has pursued me since childhood”, she sings in “La mort de Pierre”. The old new-wave torch from 45 years ago still glows. Everything on this dangerously bewitching album was composed and written by Pernet, with a little help from Jean-Sylvain Le Gouic for a few pieces. (Luc Marchessault)

If you haven’t had the opportunity to follow and hear the performances of Bruce Liu, the first Canadian to win the first prize at the 18th edition of the Fryderyk Chopin International Piano Competition, then this album is for you. On this album, surely the first of many, we hear Liu perform the bulk of the competition repertoire in his dynamic and lively style. Without falling into the excess of sentimentality and interiority that can often be found in Chopin, the young Montreal pianist appropriates the musical material in a very personal rendering, imbued with virtuoso lyricism and great gaiety. (Alexandre Villemaire)

Strength, finesse and atmospheric ambience: these are the words that could potentially define this latest release from Corina MacDonald, aka CMD. Nevertheless, it would be extremely reductive if we were to stick to these three terms alone. Social Factory Reset is an EP of remarkable richness and quality: the fruit of a long term effort. CMD has created an album that can be listened to fluidly and naturally, with sounds that have been (re)worked, triturated and intertwined, giving the whole a composition of great harmony and tranquillity. A subtle mix between dub, acid, techno, house, even post-new wave and electro. Corina is a seasoned member of the Montreal scene as a producer, DJ, host of a radio show (Modular Systems on CKUT 90.3FM), and has performed many times at the MUTEK festival. I wish her continued success in 2022. (Salima Bouaraour)

This is the first album from a band formed by composer and producer Katharine Blake (Mediæval Bæbes, Miranda Sex Garden) and multi-instrumentalist Michael J. York (Teleplasmiste, The Utopia Strong, Coil). Six additional musicians have been called upon to enrich, if need be, this delightful opus all in counterpoints and dissonances. Rich is the description that comes to mind when considering the list of 28 instruments used, in addition to the vocals and the field recordings. The music never seems saturated: finely written and performed, the impression is one of lightness and grace. These are real gems that always skilfully combine elevation and experimentation. (Geneviève Gendreau)

Everything suggested that the veteran Hamburg native had given up his musical career. Did his 2008 track “Phoenix” foreshadow the return we had been waiting for? Whatever the case, Ascii.Disko has risen from the ashes, and is obviously still smoldering. He returns with aplomb to his characteristic sounds, sometimes minimalist, sometimes extremely heavy. Now based in Spain, he offers an album of great appeal, whether it be more introspective and minimalist tracks (“Stillstand”, “Unter Wellen”) or real danceable fireworks (“Selbstaufgabe”, “Todas las noches”, “So Anders”) that have nothing to envy the classics of his repertoire. (Geneviève Gendreau)

Arca has undertaken to multiply her compositions through Kick, which began publicly in June 2020 and to which we are now entitled to the second, third, fourth and fifth parts of the same cycle. Not only does this transgender artist succeed in implanting noise and cutting-edge electroacoustics in a pop culture context, but she also infuses her Latin American roots into an already colossal oeuvre. Divided into distinct chapters where reggaeton, electronic cumbia, post-rock and grunge are intertwined, the vast Kick project tells us more about Arca’s genius. (Alain Brunet)