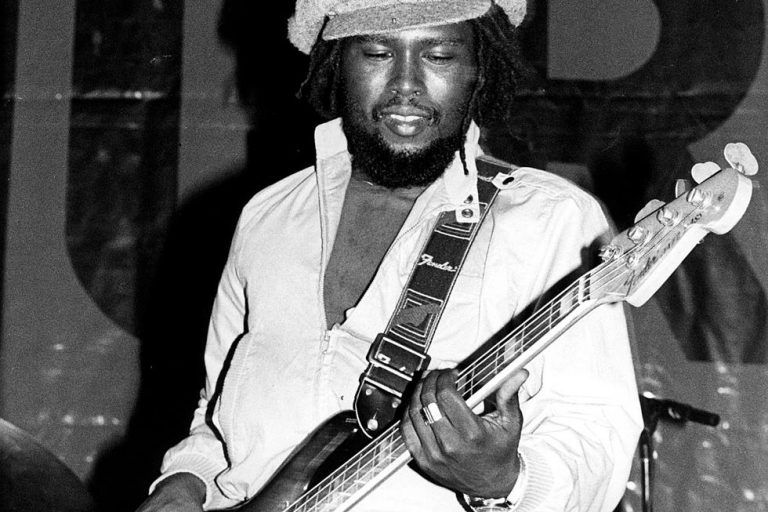 With his longtime friend Sly Dunbar on drums, bassist Robbie Shakespeare formed The Riddim Twins, known as the ultimate reggae rhythm section of the last 50 years. His death from kidney problems at the age of 68 last Wednesday in Miami, where he had been living for several years, highlights the pivotal periods that have defined contemporary Jamaican music since the 1970s, of which he was one of the primary architects.

As a teenager, after trying his hand at guitar and then drums, he developed a fascination with the electric bass sound of Aston “Family Man” Barrett, then a member of The Hippy Boys, who often hung out in his backyard, adjacent to a ganja distribution center popular with East Kingston musicians. Barrett agreed to teach him his technique, and Shakespeare began accompanying the Barrett brothers, “Fams” and his drummer brother, Carly, in the studio as often as possible, He would set up and take down the drums while observing Barrett’s bass playing. Later in the evening, Fams would teach him more precisely the basslines that had been deployed during the daily session. Around 1972, when Family Man left the Hippy Boys to join the Upsetters, Shakespeare replaced him and also became involved with The Revolutionaries, the house band at the legendary Channel One studio, where he was one of the main architects in developing the Rockers sound. The following year, at the Tit For Tat reggae club, he met drummer Lowell “Sly” Dunbar, got on stage with him for a few songs, and sealed a collaboration that would last for over five decades.

In demand by all the major producers of the time—including Bunny Striker Lee, who had them accompany his favorite artists such as Cornell Campbell, Johnny Clarke, Linval Thompson, and Barry Brown under the name The Aggrovators—The Riddim Twins spent a few months as free agents before forming their own label and production company Taxi Gang in 1979. Their first production, Gregory Issacs’ “Soon Forward”, was a huge success and brought them the stars of the moment, including Dennis Brown, Sugar Minott, Augustus Pablo, and Barrington Levy. This immediate popularity led the duo to accompany the most prominent Jamaican artists of the time, as well as international artists who came to Jamaica or to Compass Point Studios in the Bahamas—where Chris Blackwell, owner of Island Records, appointed them as the house band (Compass Point Allstars). These included Mick Jagger, Bob Dylan, Yoko Ono, Jackson Browne, Carly Simon, Joe Cocker, Cindy Lauper, Grace Jones, Sting, Britney Spears, and of course Serge Gainsbourg.

At the dawn of the ’80s, after the death of Bob Marley, Sly & Robbie developed a sound and image inspired by rock culture that would propel the vocal trio Black Uhuru to worldwide fame and earn them a Grammy in 1985 with the classic album Anthem. They collected two wins and 11 nominations, as well as a tour supporting The Rolling Stones. Taxi Gang clocked in many hours on the road as well. In 1986, along with Yellowman, Ini Kamoze, and Half Pint, the Riddim Twins toured the world and did so again with Michael Rose, Johnny Osbourne, and Bitty McLean in the 2000s.

In the early ’90s, the duo introduced “Murder She Wrote” by Chaka Demus and Pliers, and Pliers’ cover of “Bam Bam”, borrowed Toots & The Maytals’ winning song from the very first Jamaican Song Festival in 1966, which has been sampled extensively to this day. Still very active, the duo released their most recent experimental album, Red Hills Road, on the French label Tabou this very year.

It is estimated that Sly & Robbie have played or produced nearly 200,000 songs in their career! Last year, Rolling Stone magazine named Robbie Shakespeare the 17th best bass player of all time. Jamaican Prime Minister Andrew Holness tweeted yesterday morning: “He will be remembered for his outstanding contribution to the Jamaican Music Industry”.