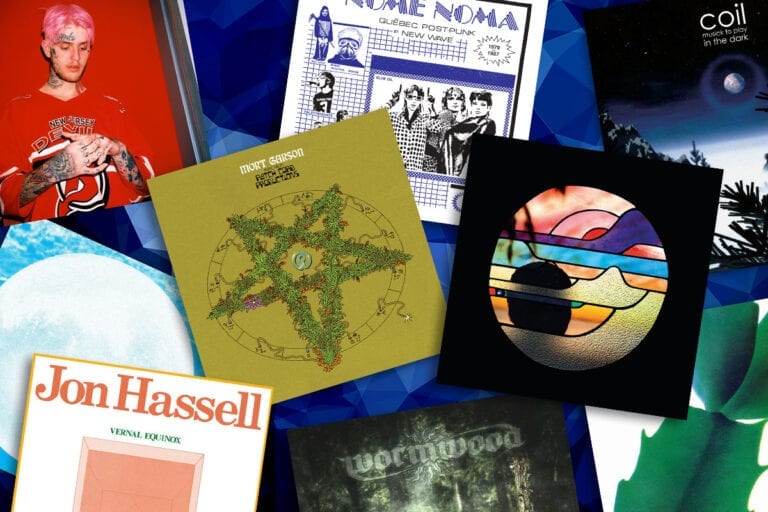 Of all the reissues this year that passed through our hands, we’ve retained 20, covering a bit of all styles and varied horizons. It is now up to you to (re)discover them.

One doesn’t re-release bad or average albums, no, that’s reserved for the magical, mythical, classic, underestimated titles, the key albums, the ones that marked their time for better or worse… That’s to say a rerelease is always a party because almost every time, we find a new version of an album we love, with its unreleased songs (and notes and photos), different mixes, studio scraps, or forgotten, missing, untraceable tracks that fans have compiled for our greatest pleasure. – Patrick Baillargeon

Keyboard Fantasies is a 1986 masterpiece written for and performed on a Yamaha DX-7 and a Roland TR-707. It had never been widely distributed and was a kind of Holy Grail to be rediscovered for true music lovers. Now it’s done, and you’ll have no excuse not to know this marvel of light zenitude, benevolent and sometimes gently dashing. Glenn-Copeland geeks often refer to Keyboard Fantasies as a New Age gem. As far as I’m concerned, if it’s New Age, it’s in its experimental fringe that this album is situated. – Frédéric Cardin

Released in 1971 via Polydor Singapore and resurrected by Jakarta’s discerning label La Munia, this eponymous final album from the Sundanese vocal trio of sisters Yani, Tina, and Parlina Hardjakusumah has lost not an ounce of charm in a half-century. Any disorientation a Westerner might experience due to language, or perhaps the heptatonic pelog scale of their region of Indonesia, is soon enough washed away by this luxurious blend of guitar, organ, vibraphone, and celestial vocals that makes you question how you ever lived without it. – Rupert Bottenberg

Talk about a rerelease that’s a real eye-opener! To the first record from the Californian grind ’n’ roll band are added the three songs from the single “Obscene Humanity” (2012) and two songs recorded at the same time as Unsilent Death. It’s corrosively catchy and it puts you in a good mood. – Christine Fortier

Jeremiah Sand – Lift It Down

The story behind this album is unusual. Jeremiah Sand, a pseudo-hippie prophet with a massive ego, decides to make his home in a studio near the town of Redding to “realize his vision” with his community The Children of The New Dawn. After several years of being squatters, things obviously go wrong between drugs, stories of disappearance and even murder, forcing them to leave the studio without ever finishing the album. Sacred Bones brings out this odd artefact of a supposedly awakened man, unusual, even disturbed. – Louise Jaunet

The posthumous re-release of Hellboy (2016) by Lil Peep’s estate allows the artist’s first mixtape to be sold on all digital platforms. He practically invented emo rap (at the least, he’s one of its most prominent icons) and has also become one of the most popular artists on SoundCloud thanks to this mixtape, recorded in a loft on Skid Row. Revealing his internal struggles with nihilistic and cynical lyrics, this is the most complete work of his short career. – Roxane Labonté

Recorded in a tank with prodigious acoustic properties, this disc offers an immersive experience like no other. Imagine, the reverb lasts nearly 45 seconds! The featured instruments are the accordion, trombone, didgeridoo, voice, whistling, and conch, a few pieces of pipe and metal as percussion, and a piece of garden hose. A true classic of the genre that has just been re-released for the first time since its release in 1989, in a remastered vinyl version with three additional pieces, recorded in the same place but with an extra clarinet, from a 1991 Deep Listening Band album. – Michel Rondeau

Among iconic sound-wizard Brian Eno’s African explorations of the turn of the ’80s was the production of this first (and sadly, last) album from Ghanaian octet Edikanfo. Their nation’s history at that time adds a note of tragedy to this souvenir of a curtailed career. Edikanfo painted with a notably pan-African palette of percolating highlife, tough Afrobeat, a dash of Ethio-jazz, and some disco as well. Between their inspired choices and Eno’s deft manipulations, The Pace Setters is a vital time capsule, from a band that could have been very big. – Rupert Bottenberg

Tortelier was an exceptional cellist. This rerelease presents him at his best, of course, with superb readings of masterpieces (Bach, Fauré, Schumann, Kodaly…). A lot of chamber music here, with sound recordings that were already very good at the time. One could not ask for better. – Frédéric Cardin

At the beginning of the ’90s, the British duo Global Communication activated a small revolution by blending ambient, techno, and the IDM then emerging. The Transmissions box set includes the now-classic 76:14, Pentamerous Metamorphosis, which is a reconstruction of Chapterhouse’s Blood Music, as well as a collection of singles and remixed tracks. An essential for any electro fanatic. – Steve Naud

Recorded from October 1976 to October 1977, in part in a studio at York University in Toronto, and released the following year, Vernal Equinox is an opportunity to hear Hassell in his early days. Although the influence of Miles Davis of the ’70s can be felt, Hassell already had his own way of tampering with the sound of his trumpet and especially of developing his meditative pieces in the manner of Indian ragas. It was this record that caught the attention of Brian Eno, with whom he later produced Fourth World Vol. 1 – Possible Musics.  – Michel Rondeau

To mark the tenth anniversary of Moon Duo’s first album, Sacred Bones offers a reissue on which three previously unreleased tracks are added. The opening track, “Motorcycle, I Love You”, sums up the band’s discography. Supported by a motorik rhythm, the Moon Duo spaceship sends us into an infernal whirlwind of colourful and fuzzy guitar, which inevitably transports us into an exhilarating cosmic exploration that is very much their own. – Louise Jaunet

The Staple Singers – Come Go With Me: The Stax Collection

Soul music sources its inexhaustible power from the collision of Saturday night and Sunday morning, the angels and the devils… blues and gospel. With their potent pop-gospel exhortations of the late ’60s, Roebuck “Pops” Staples and his kids (including Mavis, later a big star on her own) gave full and beautiful voice to a necessary feeling at their tumultuous time of social upheaval, fortified with defiant optimism. The label on the box says Stax, so you know this stuff has some serious kick. With extensive and informed notes, and seven discs worth of music, the Staple family finally get their due, in grand style. – Rupert Bottenberg

For Jeff Tweedy and his post-Uncle Tupelo troupe, summerteeth is the album where alt-country gave way to neo-baroque garage rock. The late Jay Bennett’s crucial contribution to this success is worth mentioning. Twenty-one years later, we are served a teeming Deluxe Edition in four parts: 1) contents of the good ol’ CD, 2) a fricassee of demos, spare takes and studio scraps, then 3) and 4), a raspy devil of a concert recorded in Boulder, Colorado, in November 1999, where we hear, in addition to the pieces of summerteeth, some Woody Guthrie covers from Mermaid Avenue, as well as excerpts from A.M. and Being There. Do you remember Cronenberg’s film Scanners, in which heads burst like watermelons swollen with methane? That’s what the wilcologist fears when confronted with such bliss. – Luc Marchessault

All Stars, C&N Productions, D Darling, Downbeat, Muzik City, N.D. Records, Supreme, Worldisc, Coxsone or Studio One – of all the record labels founded by the legendary producer Clement “Coxsone” Dodd, the famous blue label (Blue Coxsone), unveiled at the end of 1967, will surely be the one that will most excite the circle of collectors. This year, Studio One released a limited-edition box set of six of his rarest ska singles and their CD versions, including artists such as Joe Higgs, Winston Jarrett, The Soul Vendors, and The Melodians, with the added bonus of obscure and even previously unreleased songs. It’s incredible that these mythical archives still deliver, more than 50 years later, so many little unreleased treasures. Candy! – Richard Lafrance

If half the world succumbed to new wave in the late ’70s and early ’80s, Quebec was certainly not outdone. However, apart from the success of artists such as Men Without Hats and Rational Youth, there are others who have always remained in the shadows. This compilation finally does them justice. With a 16-page booklet, Nome Noma presents 13 obscure titles in English or French, with power-pop, punk, glam, cold wave and synthpop colours – an essential compilation that testifies to the originality and especially the effervescence of this little scene still too little known today. – Patrick Baillargeon

Thanks to the treasure seekers of the Light in the Attic label, Western audiences can finally discover Japanese environmental music. Originally released in 1986, Green, by Hiroshi Yoshimura  (1940-2003), is one of the key albums of the genre. The pure Zen landscapes drawn there by the musician’s synthesizers soothe the ears, heart, and soul. – Steve Naud

The Swedish melodic black metal band has been on my radar screen since I listened to Nattarvet (2019). Black Lodge Records had the good idea to re-release its first album from 2017. Folk and Viking influences are more present and the 12 songs are imbued with a melancholy that makes them memorable. – Christine Fortier

As a true pioneer of electronic music of the ’60s and ’70s, Mort Garson was one of the first sound wizards to compose music with Moog synthesizers. Sacred Bones pays tribute to him by rereleasing his strange, timeless, playful, and mesmerizing proto-new age tracks, which could equally well serve as a soundtrack for a Pokemon video game or an animated film like Fantastic Planet. – Louise Jaunet

Szell is the conductor you should know, even better than Karajan or Klemperer. Yes, the latter are extraordinary, but Szell was different. Think of the baroque music movement that brought back the taste for authenticity in interpretations. Long before, Szell used to make his orchestras sound like that, while others still remained faithful to gigantism most of the time. Covering 1934 to 1970, there is a lot of music here, including Beethoven’s famous piano concertos with Gilels as soloist. As a bonus, there are some unreleased gems. – Frédéric Cardin

Coil – Musick to Play in the Dark

Under the supervision of two former members of the band, Drew McDowall, present on their last albums, as well as Thighpaulsandra, Dais Records has successfully re-released this album originally released in 1999. It is certainly one of the best from the band, emblematic of its period of “moon musick”. Note a panoply of vinyls, each one more limited edition than the other, including complete and unreleased versions of each track. – Geneviève Gendreau