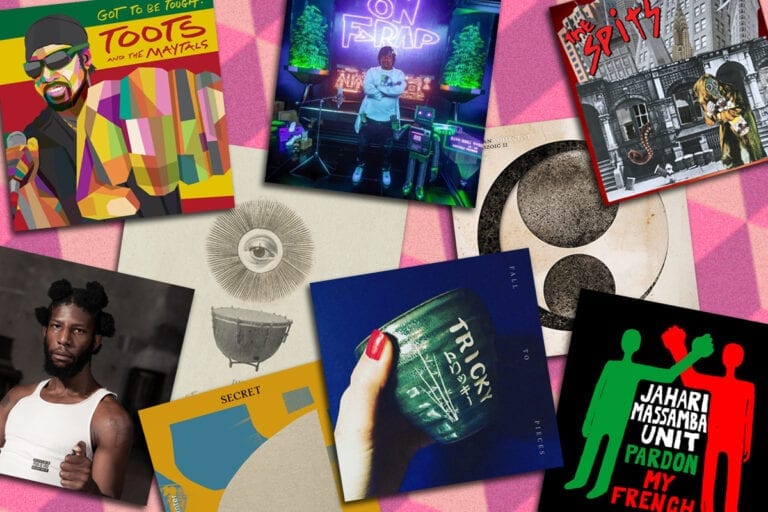 Mixing pop-punk and hip-hop, this album depicts grief and struggle against a background of pastel colours, with light, mostly energetic pieces. Truly antithetical songs conceived with Travis Barker (Blink-182), they show the Cleveland rapper in a new light. – Roxane Labonté

Toots & The Maytals – Got To Be Tough

This reggae monument was barely out of the studio with this baby under his arm when he was struck by you-know-what. We wish him the reggae Grammy posthumously in January for a solid album, but more specifically to crown an unequalled career. – Richard Lafrance

A superb idea, to gather in a box set the orchestral trilogy inspired in the composer by his observations of nature. Become Ocean is certainly the best known, the work having won the Pulitzer Prize for music and the Grammy for best contemporary classical composition in 2014. – Réjean Beaucage

I like this German band and I always take the time to listen to their new records for the immersive side of their progressive metal. Their eighth album surpassed all my expectations. It’s introspective, inventive, and well calibrated. – Christine Fortier

Tricky, true to himself. With this record in the same vein as his previous albums, the English trip-hop pioneer takes us into his very personal, dark, and emotionally charged universe. A lively flayed man with a bruised heart who, musically, manages to work wonders and move us every time. – Yohann Goyat

Ichon unveils 15 tracks that are sometimes difficult to classify, often at the crossroads of genres, each more original than the next, touching on bass music, funk, R&B, and neo-soul. The Montreuil musician sings, talks, clamours, raps, and surprises with his playful diction and the flexibility of his flow. A proposal that comes from the heart, For Real deserves the title of best album of the year. – Elsa Fortant

Ten artists from Montreal’s underground electronic music scene join forces to release a debut compilation, the proceeds of which will be donated in full to the Solidarity Across Borders NPO. While the album’s colours may be cold, they do raise the temperature. The sound ghosts awaken memories of rib cages rattling to the rhythm of kick, dripping ceilings and dancefloors smelling of beer. – Elsa Fortant

Hannah, the fourth full-length album by Hannah Read, aka Lomelda, starts off delicately, gets electrified, then moves into amplified lo-fi territory. Fourteen successful songs – including a nod to Wilco’s “Misunderstood” – add up to an offering that’s effusive, touching, and rough where it counts, making this one of the best folk-rock albums of 2020.  – Luc Marchessault

Anti-Icon sinks into your memory like thorns into flesh. Ghostemane fuses trap to metal, industrial to hip-hop, mixes styles and blurs his tracks, but he doesn’t just do that. He’s an artist in his own right and that can be felt in his general aesthetics and his extravagant costumes. – Roxane Labonté

This second album by the Montreal duo stands out for its dream-pop/indie pop that goes off the beaten track with its retro, soul and funk arrangements. Depending on the track, Anne-Marie Campbell sings in an offhand or melancholic manner about the many variations of love and human relationships that inhabit our spaces of intimacy and creativity. Winter Love is an invitation to introspective listening, to capture the intoxication of waking dreams. – Isabelle Marceau

The return of singer Dave Ingram (he left the British band in 1998 and came back in 2019) has a lot to do with it, but listening to Scriptures is a bit like waking up in the early 1990s, at the height of what is now called old-school death metal. Candy for the nostalgic. – Christine Fortier

We can’t put it any other way: pianist Hélène Grimaud took a risk with her latest album, The Messenger. Whether it’s the missing coda of Mozart’s Fantasy in D minor, which leads directly to a lively version of the same composer’s Concerto in D minor, everything about Grimaud’s interpretation takes us away from the great recordings of Ushida and Schiff. Yet this very direct approach to Mozart’s works gives them an impressive energy and sense of advancement that perfectly counterbalances the calm atmosphere of the works of Ukrainian Valentin Silvestrov. This is how Grimaud succeeds in this curious Mozart-Silvestrov marriage. – Sarah-Ann Larouche

On the strength of its last album, Renaissance, winner of the Opus 2018-2019 prize in the Medieval, Renaissance and Baroque Music category, the famous vocal quartet is back with this new album, a meeting against the currents of musical history. With their usual vocal finesse, Julien Patenaude, Benoît Le Blanc, and Philippe Martel, accompanied by their new recruit Philippe Gagné, move from baroque to classical and from modernism to the Renaissance with ease, proposing a colourful, soothing and dynamic musical journey. – Alexandre Villemaire

On Frap is a light work full of hilarious features and nods to Quebec culture that’s easy to listen to with a smile on your face. A palpable sense of fraternity allows its many guest collaborators to express themselves with ease. The rapper picks up and perfects his winning recipe: the adaptation of American drill and trap to Quebec culture. – Félix Desjardins

It took nine long years for the Kalamazoo band to return with Volume VI. Nine years for 10 short, punchy, fun, and incredibly catchy songs, altogether no longer than 17 minutes. Produced by Erik Nervous on a four-track in a Kalamazoo basement, this mini-album plunges us back into the band’s lo-fi universe, its sense of irony, its melodies as sticky as gum and its punk-rock cut with a chainsaw. The wait was worth it. – Patrick Baillargeon

With Pissenlit, Corriveau’s deep, dark voice finds a more colourful framework to lean on. Like Beck in the 1990s (and a bit like Sea Change for the more melancholy moments), the singer-songwriter unfolds his folk with a fertile imagination and a virulent rock vibe, which he accompanies with striking reflections on the territory and fate of humanity. – Olivier Boisvert-Magnen

Drummer Karriem Riggins and beatmaker, rapper, remixer and multi-instrumentalist Madlib reconcile seemingly irreconcilable jazzistic sub-genres as they were developed in the ’60s and ’70s: fusion, funk, and groove, but also modal, free, and contemporary jazz. With a digital approach where collage, quotation, transformation, and cross-fading are allowed and valued, this album is a plunge into a fascinating retro-nuevo universe. – Alain Brunet

Outstanding conductor and arranger Ed Palermo leads his big band of 16 musicians with his usual precision, to serve up a kaleidoscope of mashups in which a string of English hits are stamped with bits and pieces (and big numbers) from Frank Zappa’s catalog. – Réjean Beaucage

The gentleman troubadour from the French-speaking Caribbean is back after a long silence, and in truly splendid form. The emblematic title track liberates the Haitian people. A great Creole song, popular and refined, Afro-Cuban and jazzy with extra brass. Excellent! – Ralph Boncy

Known for playing hypnotic and mental techno, in other words based on the layering of sounds, DVS1, which has been active since 1996, released his first album on the label of techno veteran Jeff Mills. The eight tracks prove that the Minnesotan, a sound craftsman, excels as much behind a digital audio station as he does on the turntables. – Elsa Fortant