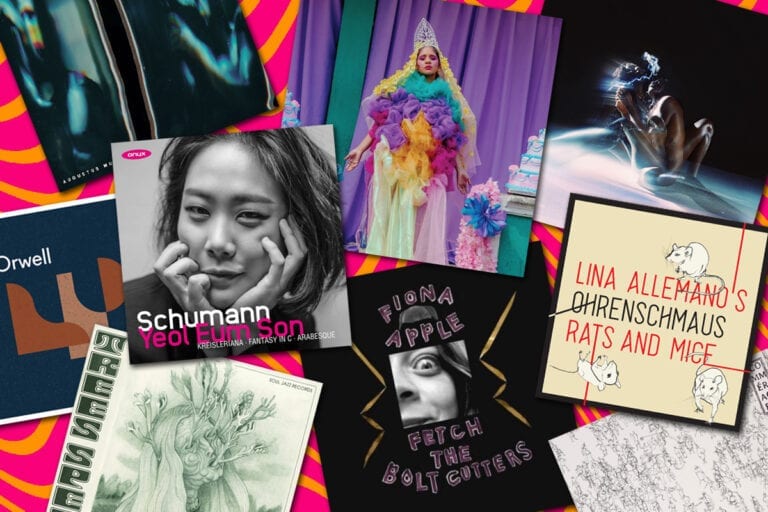 The Quebec City collective has gained momentum with this album. On Commérages, Souphl still punctuates their songs with metal salvos, between death and industrial, but also accentuate their penchant for post-rock and experimental rock. An exploration of gossip and its consequences that shows a depth that goes far beyond the framework of so-called heavy music.  – Patrice Caron

Thanks to his voice, surprisingly expressive and polymorphic, the Norwegian guitarist’s music becomes deeply moving. Overwhelming, even. And then there’s his very own way of constructing his songs, the bitterness competing with the sublime, with dazzling sounds that knock you over. – Michel Rondeau

A retro-cosmic instrumental album – each piece either takes us backwards or forwards in time – composed of an explosion of kaleidoscopic sounds and brilliant, saturated synthesizers. It’s easy to imagine many of the pieces accompanying scenes from a cult crime or science fiction series. Even if you turn away – which you wouldn’t want to do – this is an album with such an exuberant personality that you simply can’t ignore it. – Isabelle Marceau

Incredibly beautiful, Together is an instrumental album whose titles take us to the epicentre of the emotional charges caused by love, separation and hope. Reznor seems to want to show us that joy and pain come from the same source, as in the almost symmetrical melodies of Together and Apart, except for the wonder that emanates from one and the sadness from the other. The emotion is tender or tempestuous but palpable from piece to piece until the very last, where the music seems to tear and self-destruct, and finally awaken to new life. – Isabelle Marceau

The trumpet player’s work is superbly supported by Norwegian bassist Dan Peter Sundland and German drummer Michael Griener, two experienced improvisers for whom the composer has prepared worthy canvases. The sound palette of each is varied, and Allemano is particularly inspired in this respect. – Réjean Beaucage

The South Korean pianist Yeol Eum Son, well known for her energy and versatility, is sure to impress with this album entirely dedicated to Schumann. Her interpretations of Fantasia in C Major op. 17 and Kreisleriana op. 16 are marked by brilliant playing and strong contrasting and dynamic sounds. Arabesque in C major op. 18 is the conclusion. – Sarah-Ann Larouche

On this third album on the Deutsche Grammophon label, Ólafsson offers a varied selection of works by Debussy and Rameau. The pieces by the two French composers quickly follow one another and intertwine, all with the close and intimate sound and atmosphere that we now associate with Ólafsson. Note the touch of humour at the end of the album: the tribute to Rameau, taken from Debussy’s Images. – Sarah-Ann Larouche

Believing that West African musicians limit themselves to hip-hop, R&B, and jazz has been a delusion for decades. Like Prince and Blood Orange, the visionary and highly gifted Yves Tumor eloquently reminds us of this with this steaming broth of glam rock and krautrock, ingredients as tasty as his R&B and funk references. Everything is brilliantly integrated into it, everything flows from… several sources. – Alain Brunet

An astonishing, even disconcerting album, as much by the virtuosity as by the originality of the compositions, which break with all that is formulaic and commonplace, and the uncharted territories explored. Evans reveals the full measure of his immense talent. – Michel Rondeau

Fiona Apple doesn’t check in often, but when she does, she unpacks everything that’s buried in her hypersensitive soul. On Fetch The Bolt Cutters, she can go from singing to the craziest vocals, drowning a finely chiseled melody in a heap of noises. A work as unrestrained as its brilliant creator. – Steve Naud

A varied program of new works that shows that if there’s no contemporary music on the radio, it’s not because there isn’t any, and what’s out there is good music. From an ensemble that’s among those that make new music vibrate among our neighbours to the south. – Réjean Beaucage

I’m as surprised as anyone to have liked the Finnish band’s ninth record so much. This is probably because it’s a return to the roots, back to the times of Oceanborn (1998) and Wishmaster (2000). The album’s only faux pas is the song “Harvest”, which gives the impression of being catapulted into The Lion King. – Christine Fortier

The time has come for Lido Pimienta to take back her place on the throne. A force of nature and a symbol of women’s independence, she produced this album in its entirety. Leave to don again the crown that was taken from her far too soon! – Yohann Goyat

Black metal and psychedelism go hand in hand, and lead us into a state of three-dimensional weightlessness, often uncomfortable and anxiety-provoking. A journey that takes us to the bottom of the abyss, from which we come out amazed. – Francis Dugas

Rio Minas? Rio is the birthplace of the great Chico Buarque. Minas is the diminutive that designates the inland state of Minas Gerais, where the fabulous Milton Nascimento grew up. It ’s to these two icons of Brazilian popular music that Montreal saxophonist and flautist Jean-Pierre Zanella pays a vibrant tribute with his solid quartet and powerful guests including Ron Di Lauro. – Ralph Boncy

Collaborating with the Four Chambers collective, the usually shy Augustus Muller of the duo Boy Harsher reveals a new, more intimate and esoteric side of his personality on this first solo album. The atmosphere of velvet drones is softened, sensual, mystical, and sulphurous, inviting us to participate in an almost metaphysical inner quest. – Louise Jaunet

Orwell is a group led by master melodist Jérôme Didelot, a worthy heir to Bacharach, The Left Banke, and other instigators of chamber pop. On the programme on Parcelle brillante, tunes enriched with careful arrangements, retrofuturism, and one of the most beautiful recent examples of pop music penetrated by literature. – Luc Marchessault

Laura Marling – Song for Our Daughter

The prolific British singer Laura Marling, in her thirties, has already released seven albums. The most recent, Songs for Our Daughter, is yet another example of her talent. It’s a beautiful and intimate offering, with a clear connection to the California folk universe of the 1960s and 1970s: a sober, accurate, and melodic acoustic guitar playing that accompanies a precise and gentle voice. – Jean-François Cyr

Totally unique and just as successful, LeeNalchi burst out with a brilliant blend of traditional Korean pansori and artsy dance-punk, boasting dynamic vocal arrangements and melodies that you just can’t shake. There’s more to the South Korean scene than K-pop, and here’s proof – the year’s best album. – Rupert Bottenberg