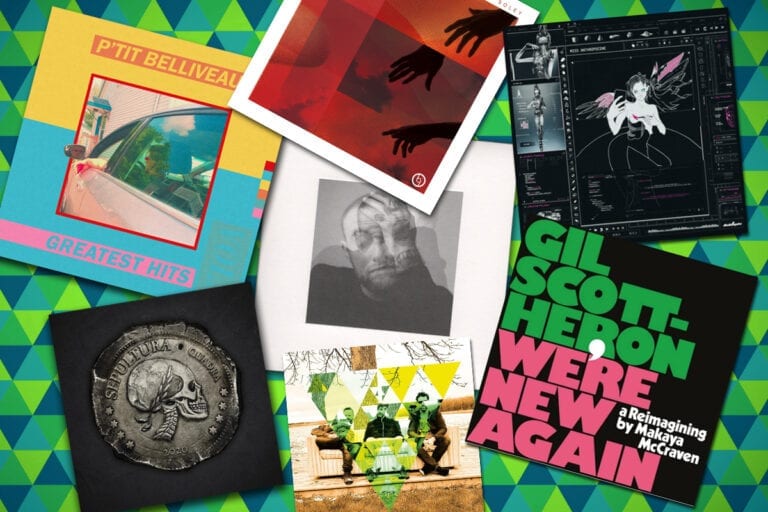 The chamber music repertoire of Max Bruch (1838-1920), a German composer best known, regrettably, for his Violin Concerto No. 1, benefits from the playing of the Philharmonic Trio. The latter deliver, with great sensitivity and lyricism, these eight pieces for viola, piano, and clarinet in a post-Romantic Brahmsian style that’s at once contrasting, sentimental and passionate. – Alexandre Villemaire

How far will Gregory Privat go? No one can say. One thing is certain: he will dazzle us again so much he amazes us. Especially since he never does the same thing twice. The West Indian pianist goes by feeling and presents us with his new trio in which he sings amid the distortion. On “Làs”, he explains why he gave up a career in engineering for music. Sincere and stunning. – Ralph Boncy

With Des feux pour voir, her fourth album, Arthur fulfilled a fantasy: to play music for real, with a real band. Surrounded by Sam Joly, Nicolas Basque, and her friend François Lafontaine, the singer and bassist found the balance between the biting energy and a bit of punk she was looking for (palpable on the powerful “Les nuages tombent”) and her more melodious pop fibre (“Tiens-moi mon cœur”, “Dans tes rêves”). This is her greatest album to date. – Olivier Boisvert-Magnen

Closing the loop with Mac’s latest album, Swimming, released while he was still alive, this album is one of the best posthumous hip-hop albums of all time. Throughout Circles, Miller invites us into the darkest recesses of his mind, all over creative and intoxicating instrumentals. The ashen voice and authenticity of the Pittsburgh native make this one of the most haunting works of its time. – Félix Desjardins

After having accustomed us to projects with sometimes dark atmospheres, the Quebec group presents an album that evokes the prairie sun and western folklore. It’s no coincidence that Mon Doux Saigneur was born during a trip to Western Canada. The lassitude in Émerik St-Cyr’s voice, superimposed on simple but effective melodies, creates a unique atmosphere that would make an excellent soundtrack for a road trip in Alsama. – Félix Desjardins

You Already Know, drummer Ted Poor’s debut album, is one of the most singularly personal records of the jazz year. Its repetitive – yet rich – rhythms and subtle arrangements are fascinating from the very first listen. Backed by Blake Mills, Andrew Bird, and Andrew D’Angelo, Poor delivers a nocturnal work of bewitching charm.  – Steve Naud

After releasing several more-than-ordinary albums – Dante XXI (2006), A-Lex (2009) and The Mediator Between Head and Hands Must Be the Heart (2013) come to mind – the Brazilians picked themselves up again in 2017 with Machine Messiah and with Quadra, prove that it wasn’t just a stroke of luck. They’re still in the game! – Christine Fortier

Reaffirming a direction taken with their eponymous album released in 2016, this EP sees the trio going even further – thanks not only to the compositions, with their solid base of melodic punk-rock crossed with the alternative rock of the ’90s and Quebec folk-rock, but especially to the production, which serves the songs even better and takes them to another level. Special mention goes to the track “Éphémère”. – Patrice Caron

Dark, sparkling electro-pop, sung with a childish, sulky voice. Pleasantly darker than her previous albums, and one could have fun saying premonitory given the surgical masks present in the video of the piece “Violence”. Grimes invents a mythological world to address the issue of human extinction on both a small and large scale,the basis of her best album to date. – Isabelle Marceau

The original album produced by the great Gil Scott-Heron was already of great standing. To revisit it was almost impossible. Yet Makaya McCraven managed to magnify it by distilling jazz hip-hop sounds in just the right dose. Great art! – Yohann Goyat

Sightless Pit – Grave of a Dog

Coming from the summit meeting of three great minds of the American hardcore scene – Lee Buford, drummer of The Body, Kristin Hayter, aka Lingua Ignota, and Dylan Walker, singer of Full of Hell – Grave of a Dog is a splendid success. Diverse musical forms are transcended in the same eschatological vision, revealing themselves to us in these pieces of great stylistic inventiveness and undeniable emotional power. -Geneviève Gendreau

Dark house from which emerge attacks of distortion, metallic percussion, and industrial spikes. Perfect for partying in an still-contaminated nuclear reactor. – Francis Dugas

On this fourth album by Cindy Lee (ex-Women member Pat Flegel), the noise drifts are more controlled, the whole better orchestrated and the production level much higher. Flegel’s dark melancholy, his penchant for the tragic romanticism of Motown pop and Richard Gottehrer’s ’60s productions takes us back a bit to the world of Badalamenti, Ela Orleans, and Suicide. What’s Tonight To Eternity is a rich and florid, work where chaos fits wonderfully into the light. – Patrick Baillargeon

2020 was the year of consecration for this young 24-year-old artist who’s gone straight into the mainstream of the great French chanson. Warm and melancholic voice, a sense of enveloping melody, Claire Pommet sings about life, love, motherhood and death in an atmosphere of light and elegance. – Claude André

Planet B, an ecological project by the double bassist from Phronesis, combines the fervour of jazz with awareness-raising. Excerpts from thought-provoking speeches punctuate the trio’s music, while Høiby’s dynamic playing fuels the passionate eruptions of saxophonist Josh Arcoleo and the imaginative polyrhythms of drummer Marc Michel. A masterstroke! – Steve Naud

In this year that marks the tenth anniversary of the death of composer Jacques Hétu (1938-2010), the Orchestre symphonique de Laval, under the baton of Alain Trudel and accompanied by pianist Jean-Philippe Sylvestre, pays tribute to this original trifluvian. From soundscapes evoking the Saint-Maurice River to the grand trombone sounds of one-man-band Trudel, the works on this album bring out the expressiveness of Hétu’s colourful and imaginative sound language. – Alexandre Villemaire

The surprise in world music in Quebec this year is Bantü Salsa! With a brass section and especially a miraculous kora played by Djeli Mory Kontuara, the band delivers Mandingo salsa that returns home to Africa, completing a Bamako-San Juan-NYC-Montreal circuit. Bravo! – Ralph Boncy

Originally known as Jonah Meltwave, his hip-hop alter-ego, P’tit Belliveau has kept his original groove and given it a whole new flavour by sprinkling it with electric guitar, disco beats, and a good dose of banjo. The result is Greatest Hits Vol. 1, a liberated, refreshing, unique album. – Olivier Boisvert-Magnen

The music fan will spot echoes of Wire, Malajube, and Indochine on Constance perdue, an opus melancholium of new wave and post-punk type, with touches of retro etheral music, created by a young veteran (Moussette and Bateau Noir). Twenty-eight minutes is short, but that doesn’t prevent Constance perdue from being a very substantial album. – Luc Marchessault