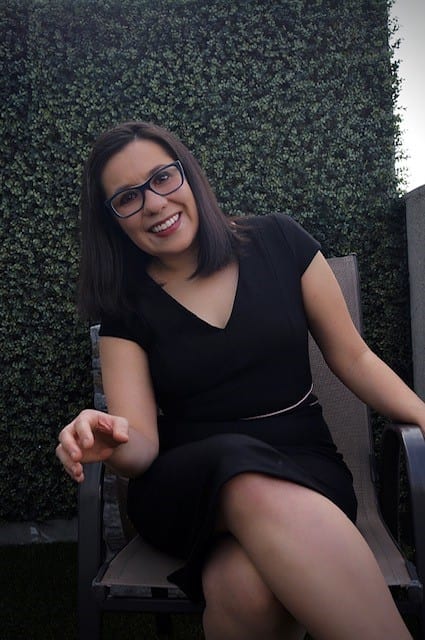 The Orchestre métropolitain’s first composition competition is devoted to four creators, yours to discover at PAN M 360. Today, we talk to Cristina García Islas.

The Mexican-Canadian composer, lecturer and teacher has participated in international festivals and symposia. She has been a guest professor at IRCAM (Paris), Laval University, and at the Consulate General of Mexico in Montreal (Canada). García Islas holds a doctorate in composition from the University of Montreal and bachelor’s and master’s degrees from the Conservatoire de musique et d’art dramatique du Québec (Montreal). She’s hosted Contemporary Musique at CISM 89.3 FM in Montreal, and has participated in panels and juries around the world. García Islas currently teaches at UNAM University and Anáhuac México University.

Cristina García Islas: I grew up in Mexico City. As everyone knows, it’s one of the largest cities in the world, with a cosmopolitan atmosphere, known for its cultural exchanges. So I started playing the piano at the age of five. When I was three, I took a stick (pencil, etc.) and played conducting an orchestra in front of my pets in the living room. As far as I can remember, I always loved Beethoven and Mendelssohn. Thanks to the interest of my doctor parents, I started my musical journey. They wanted me to develop a strong sensitivity towards art. My first musical studies began at the Yamaha Academy, at a time when the Japanese travelled to Mexico City to stay for a few months and give us important exams. I spent my entire childhood studying in this context.

CGI: I went to primary school in Mexico City, while my secondary education was divided between Ottawa and Mexico City. My parents wanted me to learn English first and so I went there several times, and one day I stayed in Canada. I studied music at the Escuela Superior de Música (México) before moving to Montreal, where I did my degrees at the Conservatoire de musique de Montréal. After a few years, I did my doctorate at the Université de Montréal, on an inter-university exchange with the Schulich School of Music at McGill University. In 2015, I went to Tel Aviv to work for ten days with musicians from the Meitar Ensemble and the Ensemble Intercontemporain at the Israel Music Conservatory. This exchange was not only academic, which is why I consider it a very important moment in my musical career.

PAN M 360: Do you identify with a compositional tradition?

CGI: I’m not very sure that I belong to a tradition. My music has always been very melodic, I look for expressiveness before experimentation. Classical music touches me a lot, and romantic music even more, but singing – which goes beyond tonality and textures – is very important to me. So I wonder if noise and textures belong to the tradition in this century. If so, I’m totally traditional and if not, I’m probably a kind of musical hybrid.

CGI: I don’t consider myself as belonging to a single aesthetic. However, French spectral music, the music of the Italian Fausto Romitelli, the Mexican Silvestre Revueltas, and the Dane Per Nørgård are important pillars in my creation.

PAN M 360: What are the main features of your work, in instrumental music and opera?

CGI: My music expresses this need for me to seek a balance between expression linked to singing (and the search for a melody) and textural exploration, which do not precisely have to do with the traditional classical heritage. I am motivated by sound exploration that goes beyond harmony and gradual, vertical musical discourse, linked to a relationship of harmonic tension and relaxation. I am looking for a more horizontal treatment, guided by sound echoes contained in chromatic melodies that sometimes result from free movement, inspired by colourist, imitative, or purely resonant explorations that seek to impose themselves in long and full sonorities. All kinds of emotions are reflected in the world of creators and this includes self-acceptance. I have integrated the fusion of different cultures throughout my development as a composer and human being, which in my case lies between Canadian and Mexican influences. I also like to seek a union between being and nature.

PAN M 360: What do you see as the difference between a composer educated in higher education in 2020, compared to composers from previous generations?

CGI: I find that the education of previous generations has benefited from a great deal of research and development in musical acoustics. Composers were closer to scores on paper and handwriting was much more present than it is today. On the other hand, I find that the development of auditory training, the theoretical and practical skills required in composition were very different. Today, many composers focus on learning how to mix and process sound. Progress has been made in the study of the amplitude of artificial sound spectra and not only acoustic spectra. It is more necessary to amalgamate technology with acoustics and to generate mainly electro-acoustic or mixed mixtures. The creation of new generations is mainly reflected in the computer and in the exploration of new forms of expression, mixing the machine and the performer. Furthermore, it seems to me that the use of technology has opened up a wide range of possibilities for sheet-music publishers in this century.

CGI: I love the orchestral music of Northern Europe (especially Jean Sibelius and Per Nørgård), also the music of Kurt Weill, and I have developed a particular taste for Italian electronic swing. When I’m very tired, I like to listen to Bach rather than Handel. I like medieval music to meditate and cleanse my thoughts, especially the music of the composer Hildegard von Bingen. But when I feel stressed or depressed, I prefer to listen to pop music from the ’80s. I also like French songs with accordion.

PAN M 360: Do you believe you have a global composition project that sets you apart from your contemporaries as a composer?

CGI: I hope so! (laughs). I believe that the audience will be the most relevant to answer the question, and will be able to see that one day. At the moment, I’m thinking of creation as the integration of the great cycles, a bit like Stockhausen did with his operas. Recently, I’ve been working on a project that will take me three years, because it’s exactly a cycle for orchestral, vocal, and chamber music with a single subject. I want all the pieces that result from this cycle to be connected by a very similar sound, a similar character, and to feed off each other, regardless of the endowment.

PAN M 360: What’s the project for the Orchestre Métropolitain?

CGI: The writing of an orchestral piece inspired by Beethoven’s Eighth Symphony. This work made me think of the title Re-silience, considering the English word “silience”, which refers to the type of excellence or talent that has gone unnoticed and is almost unquestionably unknown. On the other hand, adding the prefix “re-” invites us to think that we are once again exposed to the passage of the unnoticed, unknown, or little understood. Also the word “resilience” refers to the ability to overcome critical moments and adapt after experiencing an unusual or unexpected situation. Personally, I think the Eighth Symphony is perhaps a kind of beautiful ghost that honourably takes up its sweet melodies from the back of the room. Finally, the main message, or objective, I would like to reflect in my work is to integrate more traditional and more textural elements, in the search for a language inspired by the expressive force of the great genius of Ludwig van Beethoven.