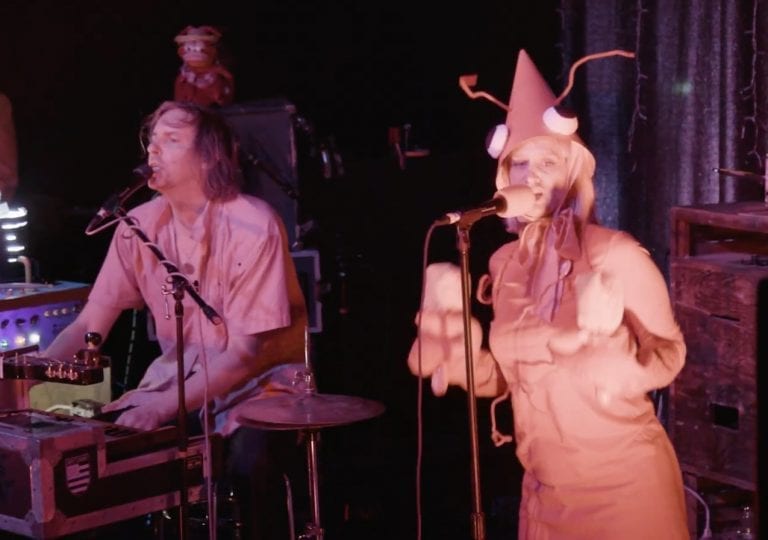 An ode to that special monster that frequents Quintron & Miss Pussycat concerts, soaking up the extravagance of their performances.

Quintron & Miss Pussycat are back with Goblin Alert, their new album just released on Goner Records. The Q&P experience is a barely controlled electronic chaos, an amalgam of “Swamp-Tech” rhythms, small explosions, incredible clothes, and puppet theatre. To mark the release of this 17th effort, the ineffable duo from Louisiana present a video for the album’s title track. “Goblin Alert” is an ode to that special monster that frequents Quintron & Miss Pussycat concerts and soaks up the extravagance of their performances. The freak in the pink beret, who smokes two cigarettes at a time and invents his own dances? The guy at the merchandise table who spills his drink in the t-shirt box, but knows the lyrics to every song? You get the picture. The video was shot by brilliant Louisiana filmmaker Drew Stubbs during Q&P’s last show before Armageddon arrived, on Shrove Monday at One Eyed Jacks in New Orleans’ French Quarter. If you look closely in the crowd, you might see Seth Rogan with glitter on his face trying to escape, and also the Jesus freaks who arrive by bus every year to protest the duo’s annual rituals. An unpretentious, fun little clip that will put a smile on your face.