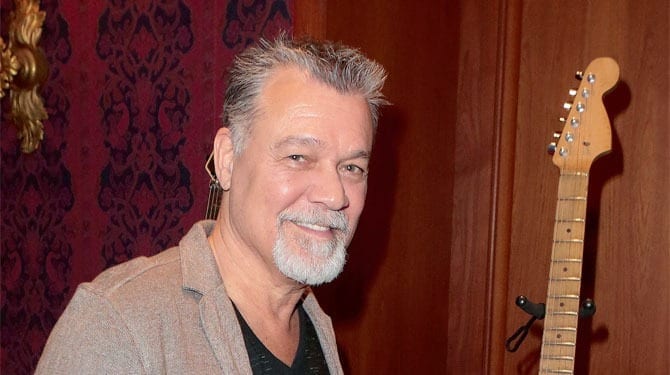 The paradoxical legacy of the late Eddie Van Halen is both brilliant and superficial. Which to choose?

“I’ve already changed the way to play rock guitar, right? Well, I don’t see what else I could come up with? Of course, I can play as fast as I used to, there are new things that come up unconsciously here and there. As I play and play and play again, things happen. But when I’m asked if I’ve developed a new technique yet, I invariably answer in the negative.”

Taken from my interview with Eddie Van Halen, published in La Presse in 1995, this quote sums up the artist he was. His disconcerting skill enabled him to achieve extraordinary technical feats and innovations, but this self-taught player, not much inclined toward music theory, stuck for a lifetime to a post-pubescent vision of rock creation. This legendary life came to an end on October 6, 2020, 50 years and 18 days after the death of Jimi Hendrix, the ultimate guitar hero of the modern era. Cancer had already beset EVH previously, and it finally got the better of him. Rest in peace.

A gifted pianist when he was very young, Eddie Van Halen played mainly drums at the turn of adolescence, and his brother Alex, guitar. One day, they reversed roles, and the family band was deeply transformed. Alex became a great hard-rock drummer and… the third instrument Eddie chose would last his lifetime.

It should be remembered that Van Halen perfected tapping, certainly his main contribution as an instrumentalist: this technique consists of amplifying the neck of the electric guitar to allow the left hand (for right-handed players), which performs the harmonic or melodic functions, to emit notes and chords by hammering or choking the frets of the neck while tapping the strings of the guitar with the right hand – or vice versa for left-handed guitarists.

The technique comes from classical guitar; Van Halen isn’t the first to have popularised it on the electric guitar, but he is certainly the one who offered a virtuoso and simply spectacular blueprint for it. Tapping was then adopted by so many hard rock, metal, and jazz guitar champions, who took the matter further – one thinks first of Steve Vai, an associate of Frank Zappa before flying on his own – and put forward music that was both highly technical, and highly boring….

So EVH’s post-pubescent genius, his super-virtuosity and the technical revolutions in his playing made him the most outstanding rock guitarist since Jimi Hendrix. His famous solo on MJ’s “Beat It”, that absolute hit of the ’80s, confirmed his status as an absolute guitar hero. In addition, he developed a guitar model in his own image, the Frankenstrat, a composite instrument made up of different brands, including the mythical Stratocaster that Jimi loved to play – hence the evocation of Frankenstein, a fictional composite creature as we know it.

At the end of the ’70s and beginning of the ’80s, Eddie Van Halen was without a doubt the dominant guitarist on the rock planet.

Although … the artistic depth of this young Dutch immigrant transplanted to the Californian suburbs was not always equal to his extraordinary talents as an instrumentalist. He did more in spectacular entertainment than in research and refinement. The singers of his famous band, David Lee Roth and Sammy Hagar, were hard-rock party entertainers, needless to say they sang banalities and celebrated the rock lifestyle in its most superficial form. Eddie’s anthems, “Jump” and its ilk, nevertheless conquered a large portion of his generation and more. American fighter pilots, for example, used VH hits to fuel their fighter jets while on mission during the Gulf War. Hmm…

A rock multi-millionaire, Eddie Van Halen preferred the life of the show to that of the concert, although he inevitably reserved for himself long parentheses of creative virtuosity. In front of arena audiences, the band’s superficial compositions allowed for inspired, very warm, very sensual playing, far beyond technical prowess. Eddie’s feel was at least as powerful as his giftedness.

When asked why he hadn’t collaborated with composers and virtuosos from more “serious” fields of music, he replied that no one had asked him. Too bad… but anything that looked like a headache was immediately rejected by EVH.

“For me,” he said in the same interview with La Presse, “music is a question of feeling. Fuck all the technique! And, as so many grunge bands reminded us at the beginning of this decade, let’s focus on creating good songs. Standards are higher than before, you say? I don’t think it’s that important. If music doesn’t come from the heart, it’s absolutely worthless. It doesn’t matter how you do it – if people like your art, you’ve achieved the main goal. When you’re able to reproduce the ideas you have in your head on your instrument, that’s what matters. You don’t have to be a great technician at all if you want to communicate strong feelings.”