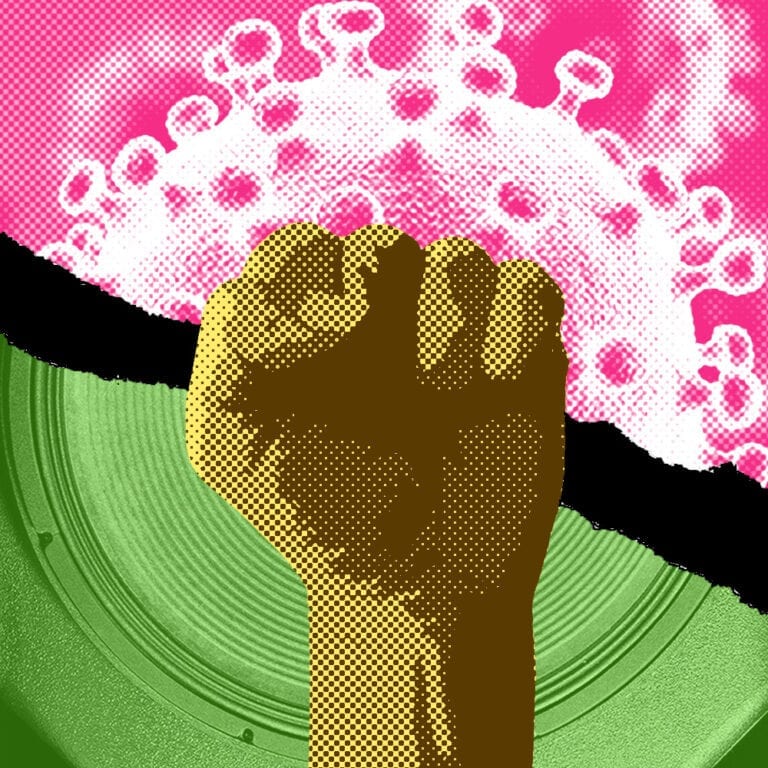 A British expat based in Tokyo, Ian Martin is the head of the indie record label Call and Response, a music columnist for The Japan Times, and author of the book Quit Your Band! Musical Notes from the Japanese Underground. This essay was originally written for and published by Japanese music magazine Ele-king, and appears here at PAN M 360 with their gracious permission.

“Music is just music. Leave politics out of it.”

If you’re reading a platform like PAN M 360, there’s a strong chance you already disagree with this statement. But as this disastrous year of 2020 continues shaking up lives around the world in ever more ways, it’s perhaps worth pushing this idea further and asking, “Is music even relevant if it’s not political?”

Firstly, we should think a little about what we mean by “political”. Politics is often understood as synonymous with “issues” and “activism’, words that suggest (often with negative connotations) some direct engagement with matters of government and society. And some music, whether Billy Bragg, Rage Against the Machine, or Run the Jewels, is certainly political in that sense. But music is also already political in the sense that it talks about human lives and experiences – relationships between people, their daily struggles, navigating work, friends, family: all these things are invisibly influenced by political decisions that affect working hours, gender roles, salaries. The fact of being mainstream or underground is political simply by virtue of occupying one place or another in relation to culture’s dominant aesthetics and values. When people say they don’t want something to be political, what they usually mean is simply that they don’t want to think about its political implications.

But many people do think about how politics touches their lives. They are enraged by the shameless lack of justice they see around them and the total lack of consequences for the powerful purveyors of those injustices. The flood of anger that erupted this spring at Prime Minister Shinzo Abe’s attempts to stack the legal system with his allies was interesting, as was the speed at which the singer Kyary Pamyu Pamyu was pushed to erase her Twitter criticism of Abe over the issue. This was a specific issue with big political implications, attracting wide engagement across Japan, but the entertainment industry is institutionally incapable of reflecting those sorts of feelings.

The COVID-19 crisis has pushed politics right up to our front doors and pressed it against our faces. The act of walking to a convenience store, the assessments we make over fellow pedestrians’ mask usage, the negotiations we make over space as we pass on the sidewalk, the decision over whether to go out to a venue and support the music we love – that’s all politics intervening in our lives. The crisis has also accentuated inequalities and injustices around the world, with an important thread of the Black Lives Matter narrative coming from the pandemic’s disproportionate effect on racial minorities and the inequalities that push them into vulnerable service jobs.

Whether through the music itself or an artist’s public statements, engaging with those feelings is part of music’s role though. It is part of the landscape of how we think and feel as a society; it’s a mirror that lets us see not just ourselves individually but also collectively – it shows us that we aren’t alone. And when the mainstream is incapable, that role falls to the independent or alternative scenes (because if not, what are they even independent from, an alternative to?) The U.K. chart success of acts like Stormzy and the subversive rise of indie bands like Sleaford Mods shows the power music can carry when it connects to the politics of people’s daily lives.

Something like Black Lives Matter may seem like an American problem and not really a Japanese issue. This is debatable, but even if we take it as true, the issues it raises about society and how we include or exclude people based on their race, ethnicity, gender, sexuality, or social background exist here and deserve to be untangled. Whether in big issues or personal interactions, the social conventions we follow without thinking about are the ones most in need of exploration by the arts. It’s not just that music has a social responsibility to consider these matters: it’s that music, regardless of what it’s about on the surface, can be richer and less prone to cliché, when it doesn’t take “the way things are” for granted.

The relationship between the arts and politics is important in another way too. There are numerous institutional barriers that limit radical thought and alternative culture’s ability to communicate their creativity or visions for the future simply because media landscapes have grown up around the same interests that those independent voices seek to challenge. Their power instead lies in the ability to gather together and amplify their voice – whether in concerts, meetings, social events, or rallies – but COVID-19 disrupts that ability. China took advantage of the lockdown in Hong Kong to strike a savage blow against the protest movement there, while Donald Trump is openly using the postal service to restrict people’s ability to vote safely in the upcoming U.S. election.

While the stakes are lower and far less violent, alternative music culture too, in its own way, is affected by these forces. The pandemic has closed down people’s ability to gather, the word-of-mouth networks and physical meeting spots that keep the culture alive when it is already locked out of wider discourse by media ownership, talent-agency influence, Spotify algorithms. The matter of how to organize, disseminate information, and amplify voices under the restrictions brought on by the pandemic should be a matter of mutual urgency to both artistic and political spheres.

On the most intimate level, an underlying political awareness can enrich something as personal as a love song, helping it slip free of clichés and touch listeners in fresh ways. On a broader social level, artists feeling a greater freedom to directly address the politics of our daily lives can help music connect to the anxieties, anger, and concerns people already have, as well as help articulate more optimistic possibilities for the future. On a purely practical level, political activism and creative culture face many of the same obstacles and could well look to each other for help building the tools to help overcome them. In that sense, perhaps asking if music can retain its relevance without politics is not strong enough. Perhaps instead, we now need to be asking, “Can music even exist if it is not political?”