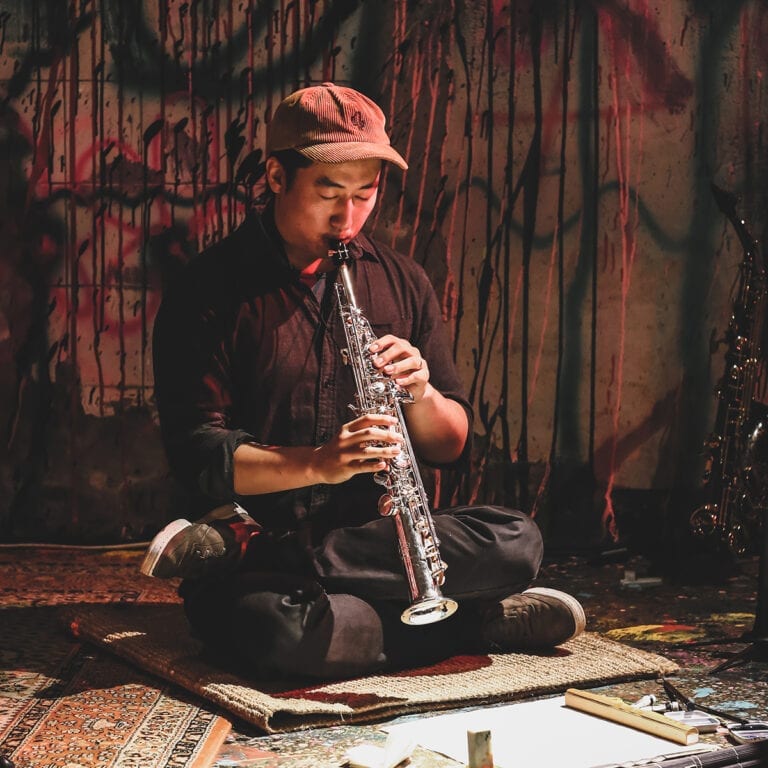 Equipped with an old Tascam 242 four-track recorder and determined to make this music known to the rest of the world, he founded the Mung Music label this year, with their first releases launched in July.

Korean saxophonist Sunjae Lee is a native of Boston. After studying music, he released three albums as a leader or soloist at the end of the 2000s on the independent label Pure Potentiality: Srivbanacore, Meditations, and Equilibrium. In early 2010, he moved to Portland, Oregon, where he pursued a career in natural medicine and obtained a doctorate in naturopathy and Asian medicine. At that time, he led a jazz trio, the Kin Trio, which released the album Breathe on PJCE Records. He also learned the art of Asian calligraphy.

In 2014, he moved to Seoul, South Korea, to practice naturopathy, while continuing his musical activities with various jazz groups, including drummer Soojin Suh’s Chordless Quartet, which explores harmony and space with great freedom.

In 2019, Lee released the album Entropy, featuring trumpeter Peter Evans, with whom he had worked during his years in Boston.

Lee is also a painter in the Asian tradition. He’s the artist who designs the covers for the albums released on his label.

To find out more about this new label, PAN M 360 contacted Lee, who took part in the interview and answered our questions.

PAN M 360: In an interview, you said that when you were growing up in Boston, you couldn’t care less about your Korean heritage. When did the question of identity suddenly change and become important, and how did it happen?

Sunjae Lee: This happened late in the game for me, while I was in the middle of studying Chinese Medicine and Naturopathy in Portland, and delving deep into the Chinese language and history. Eventually I began learning about the various Korean systems of traditional medicine, and I think that was the final straw for me, so to speak. For decades, I was always uncomfortable about my identity and the fact that I potentially could connect with a rich heritage, ancestry, and language, but had been basically ignoring it. Learning traditional medicine, as well as suddenly becoming interested in Asian brush painting, were the two biggest triggers for me.

(A note to readers: jazz made its first appearances in South Korea in the late 1950s, mainly in clubs frequented by American soldiers stationed there after the Korean War. The singer Park Seong-yeon later helped popularize the genre by opening the Janus Club in Seoul in the late 1970s. Since then, a number of jazz clubs have opened there – Once In a Blue Moon, Jazz and the City, All That Jazz, Club Evans, Club Moon Glow and Soul to God. In Busan, you can find Club Monk, The Back Room, Jazz Cat)

Sunjae Lee: The conventional jazz scene is thriving. It has a bit of a conservative nature, but there are many talented musicians, and definitely places here and there to play. As for the improv music scene, as you might have guessed already, it is underground to the point of being nearly extinct, but there are little pockets and islands here and there which we are all working hard to synthesize into a community. I believe that the appearance of Choi Sun Bae is a major event, and is the first time that there is a true “elder” who is willing and able to help support the young musicians here. Of course, there is the master saxophonist Kang Tae Hwan, but he is a bit more reclusive and only performs a few times a year, and almost never with the younger generations. Through Choi Sun Bae, I learned of the existence of Alfred 23 Harth, a near legendary saxophonist and multi-instrumentalist who has been active on the worldwide experimental music scene since the 1960s, and has been living in South Korea for the past 20 years. Alfred has also begun playing with us, and has been incredibly kind and supportive, another elder figure that has suddenly appeared and gives me hope for the scene here.

PAN M 360: Why were you compelled to start a new record label in the first place?

Sunjae Lee: The main reason is to highlight the amazing musicians here in Korea who play improvised and experimental music – or even just original compositions. There is virtually no audience for it here, and only one venue that consistently allows for and supports this type of music, called Ghetto Alive. They are doing an amazing job, but there is only so much that a single venue can do to support a scene. Thus, the goal of the label is to feature these musicians and show them to the international audience, because they are incredible and deserve more recognition.

PAN M 360: What notion lies behind the word “mung”, and what would be the label’s philosophy?

Sunjae Lee: “Mung” is a Korean term, a bit of a slang phrase that means something like “spacing out”. When someone is really tired and stares off into space, or is just not thinking about anything in particular, this is when we say that phrase. During these times, our conscious minds take a break, allowing for our subconscious minds to take over, and sometimes give way to new, brilliant thoughts. In improvised music, the subconscious mind’s fluid brilliance is also valued over the conscious mind’s concrete thought processes, and that’s why I chose the term to represent the type of music.

Musically speaking, I hope to capture three types of subgenres that have no representation or support here. Firstly and mainly, jazz musicians who are interested in free jazz and improvised music. Second, jazz musicians who write original compositions that feature improvisation heavily, or are unconventional or on the experimental side. Finally, collaborations with traditional Korean instrumentalists who also do free improvisation – this group is growing in number, and there are now quite a few amazing improvisers who use traditional Korean instruments (Doyeon Kim, in the U.S., is the most impressive example in my mind).

PAN M 360: Can you talk about each of the four albums that you put out in July and August, their particularities and the musicians involved?

Sunjae Lee: I will start from the second one – Eunyoung Kim’s album Earworm is the first “official” release of the label, and she is one of the artists that I was most interested in for the label. In my mind, she is a total genius of jazz piano and should already be world-famous, but here in Korea, she does not have that kind of recognition. She sat down and recorded those 11 tracks all at once in the course of a couple hours, without any rehearsal and hardly any editing afterwards, and I think it turned out amazingly well.

Next is Ma-chal by a group called Saaamkiiim – which is an improvising trio that has a motley crew of drums, electronics, and a traditional Korean bowed instrument (like an erhu). I’ve been following the group since its inception a couple years back, and appreciate their consistent and playful chemistry, and I’ve also admired the way that the leader Dey Kim has spearheaded his own improvised music series here and there, in places where there were none.

Finally, the most recent release, Embrace, was from the new project Baum Sae, which translates as “night bird”, by drummer Soojin Suh, who is one of the most active and prolific on the scene here. She has been collaborating for years with traditional Korean vocalist Borim Kim in the group Near East Quartet, led by Sungjae Son, and the two of them added a geumungo player (a traditional plucked instrument) and made some new compositions combining improvisations with traditional Korean music elements.

PAN M 360: What did you try to achieve with your Palindrome, with regards to its theme ?

Sunjae Lee: The Palindrome album was a test album of sorts, but also very meaningful as the first effort of the label because of the sudden reappearance of Choi Sun Bae on the free jazz scene here. To give some background, he was one of Korea’s only free jazz “masters”, playing improvised shows with Kang Tae Hwan here since the 1970s, but due to the chilly reception among Korean audiences, he decided to play improvised music only in Japan, where he gained a large following. We thought that he had transitioned to mostly standard jazz and lost interest in free jazz, but thanks to the efforts of the owner of Ghetto Alive, it was discovered that this was not the case.

He did a solo, improvised set for 90 minutes straight at Ghetto Alive, and it was one of the most compelling, impressive shows that I’ve seen in my time here in Korea. I contacted him immediately afterwards, and began playing with him with drummer Junyoung Song, who is Eunyoung Kim’s husband and my closest musical associate here. I should mention that Choi is nearly 80 years old, but has the stamina and improvisatory wit of someone our age, and title Palindrome was inspired by this feeling – him being at nearly the opposite end of the age spectrum while feeling similar to us in energy, a seeming reversal of time.

Sunjae Lee: I have five more recordings lined up for the rest of this year, and I hope to release them all by early 2021, and continue to generate publicity by spreading word to overseas publications and musicians. My hope is that the foreign acknowledgement will aid in the grant-application process, as the Korean government tends to support projects that spread Korean culture overseas. My dream is to be able to pay the musicians generously for their time and efforts – as I have a full time job managing a chiropractic clinic here, making money is not a personal goal of mine through this label – and encourage them to keep creating their original music, and connect them to audiences abroad that can appreciate their music much more than the local scene here. After the label gains some traction, my hope is that other great Korean musicians will take notice and in particular, I hope that musicians such as Okkyung Lee and Kang Tae Hwan might one day consider to record on the label as well. And perhaps in the far-off future, I hope the label’s presence will encourage improvising musicians from abroad to visit and make music with us as well!

For those interested in going back up the Korean trail mixing traditional and improvised music, let’s mention the ensemble Black String – guitar, percussions (including a yanggeum, a dulcimer played with small hammers similar to the Persian santur, comprising seven sets of four strings), bamboo flutes and geomungo (a six-stringed zither). Black String is, by the way, the English translation of geomungo. The quartet describes its music as “Korean contemporary music without borders”. So far they have released three albums on the ACT label: Mask Dance (2016), Karma (2018) and NES (2020), which also features the Vietnamese-born French guitarist Nguyen Lê and the Moroccan guimbri player Majid Bekkas.

Also worth mentioning is the Near East Quartet (mentioned above) of Korean saxophonist Sungjae Son, which includes drummer Soojin Suh, who released a record on the ECM label in 2018 juxtaposing elements of contemporary jazz and traditional Korean music.