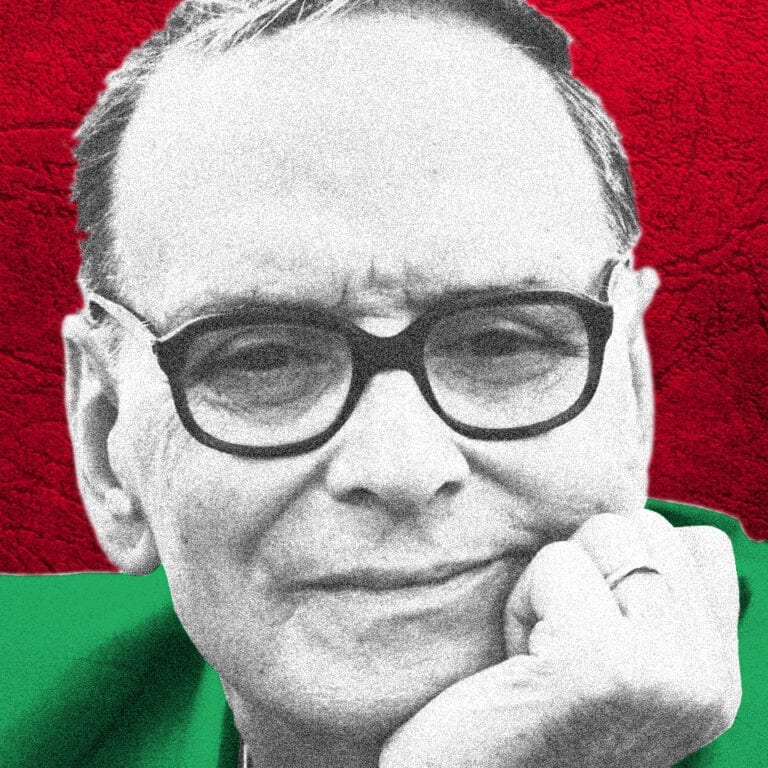 Profoundly innovative and enormously influential, Italian composer Ennio Morricone is simply the most important name in music for motion pictures – a name now uttered most disconsolately, following the Maestro’s passing on July 6, 2020, at the age of 91. He left us with hundreds of film scores to his credit, spanning all genres (and production budgets!) and marked by many musical moments that have haunted the memories of generations of film and music lovers.

In 1964, Ennio Morricone was already on a roll as a conductor and composer. Sergio Leone asked him to create a musical score for A Fistful of Dollars, his first spaghetti Western. The two Romans had known each other since childhood. Their collaboration would prove to be fusional and last 20 years, until Once Upon a Time in America in 1984. In the meantime, Morricone composed the soundtracks for six other films that Leone directed, wrote or produced: For a Few Dollars More (1965), The Good, the Bad and the Ugly (1966), Once Upon a Time in the West (1968), Once Duck, You Sucker! (1971), My Name is Nobody (1973) and A Genius, Two Partners and a Dupe (1975).

Leone, quite lucidly, acknowledged that the immense success of his Westerns relied at least as much on Morricone’s talent as on his own. In fact, given their strength, Morricone’s compositions quickly escaped the screens to begin their own lives, moving from “film music” to “music”, no qualifier. From the late 1960s to 1975, the soundtracks of Once Upon a Time in the West and My Name is Nobody were common to countless suburban living rooms.

Leone had created a fantasized American West, with filming generally taking place in Cinecittà or in the mountains and deserts of Spain, with occasional shots of Monument Valley inserted. Morricone responded to Leone’s fantasies with freely imagined music. His scores largely escaped the traditional music of the American West, with the exception of the Mexican components, i.e. military marches and mariachis, all with trumpets well up front. The twangy guitar was anachronistic and the harmonica was alien.

However, the abundance of finds made up for all kinds of deficiencies: ingenious percussion imitating hoof-clattering and gun or whip shots, bells of all kinds, harpsichord, mandolin, large organs and violins, choir members with angelic voices. Among Morricone’s most memorable “Leonian” pieces are four in four different registers: “L’estasi dell’oro” – “The Ecstasy of Gold” – taken from The Good, the Bad and the Ugly, is emblematic of Morricone’s tragico-romantic register: brass, strings, and bells, to which is added the enchanting voice of soprano Edda Dell’Orso, one of Morricone’s favourite singers.

In the cheerful and sunny department, let’s think of “Il mio nome è Nessuno”, the eminently catchy title piece of My Name is Nobody with its synth riff and recorder chorus. In the bewitching and dreamlike category: “Giù la testa”, the main theme of Duck, You Sucker!, a well-known tune in which the violins are supported by jazzy drums, while aerial chorus singers chant, “Seán, Seán” (the first name of one of the protagonists).

Finally, in the majestic, grandiose and solemn register: “C’era una volta il West”, title piece of Once Upon a Time in the West, corresponding to the arrival of Jill (Claudia Cardinale) at Flagstone station. Sergio Leone explained that he had been inspired by this piece, previously composed by Morricone, to build this monumental scene.

Morricone’s penchant for strange, startling sounds and haunting vocal motifs was already snugly incorporated into his composition style when the second half of the ’60s rolled around. The psychedelic sensibility was in full swing, pop music was undergoing a massive metamorphosis, and Morricone was ready to make the most of everything the moment made available. An excellent example is his score for the 1968 pop-art curiosity Danger: Diabolik. An adaptation of a racy Italian comic book series, soaked in lurid colours by director Mario Bava, it was a chance for Morricone to lighten up, let his hair down, and bring snarling fuzz guitar and thunderous rock ’n’ roll drums into the equation.

As the years progressed and tastes changed, Morricone would add horror shockers, police dramas, science fiction, and more to his catalogue of film genres, but it’s clear that he always had a special place in his heart for smart, uncompromising political cinema. Thus his contributions to Gillo Pontecorvo’s powerful and very timely The Battle of Algiers (1966), a prototype of the faux-documentary that certainly had an authentic impact; to Pier Paolo Pasolini’s deeply disturbing anti-fascist delirium Salò, or the 120 Days of Sodom (1975); and to Giuliano Montaldo’s portrait of the famous anarchists, Sacco e Vanzetti (1971), on which Morricone collaborated with American folk singer Joan Baez, an important progressive voice.

Morricone is probably the most famous composer of film music in the world of cinema, which is not surprising when you consider that he has created more than 500 soundtracks, but what is less well known are his other musical activities and his beginnings. The eldest son of a jazz trumpeter, he was introduced him to music at a very young age. Following in his father’s footsteps, he first obtained a diploma in trumpet at the Accademia Nazionale di Santa Cecilia in Rome in 1946, before moving on to composition, instrumentation, and conducting.

In 1965 he joined the Gruppo di Improvvisazione Nuova Consonanza, considered the first experimental group, which blended jazz, musique concrète, serial music, electronics and improvisation, employing extended techniques on traditional instruments and experiments with feedback. Formed by the composer Franco Evangelisti, the group made about ten records. For the curious, two compilations are recommended: one published by the German label Edition RZ, 1967-1975, and the other, an impressive boxed set including four CDs, a DVD and a booklet, Azioni / Reazioni 1967-1969, published by Die Schachtel.

The group also participated in the creation of many of Morricone’s soundtracks, including Un Tranquillo Posto Di Campagna (A Quiet Place in the Country), a horror drama produced in 1968, and Gli occhi freddi della paura (Cold Eyes of Fear), a thriller from 1971, two excerpts of which can be found on Mike Patton’s excellent Crime and Dissonance compilation, on his Ipecac label.

Parallel to his film activities, Morricone composed a number of chamber music and orchestral works, including Concerto for Orchestra in 1957, Concerto for Flute and Cello in 1983, Cantata for Europe in 1988, a trumpet concerto in 1991, Terzo concerto for guitar, marimba and strings in 1992, and Voci del Silenzio, a choral work, in 2002.

Mr. Morricone, thank you for your work, may eternity be sweet to you.