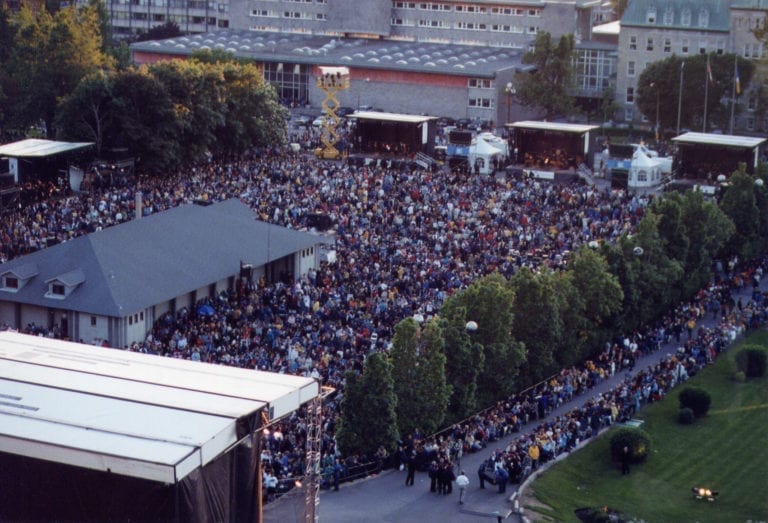 Exactly 20 years ago, an unprecedented orchestral display of contemporary music, since unequalled, took place at the foot of St. Joseph’s Oratory: La Symphonie du millénaire. Walter Boudreau, Artistic Director of the Société de musique contemporaine du Québec (SMCQ) had imagined this collective work being performed in front of 50,000 spectators, a sort of mini-Woodstock of contemporary music.

Let’s go over the genesis of this vast operation again, for those who missed it. On a beautiful Sunday in 1965, Walter Boudreau was planted on a rocky outcrop overlooking the eastern slope of Mount Royal. The Sunday resonance of Montreal’s church bella astounded the budding composer.

Three decades later, he’s the artistic director and principal conductor of the Société de musique contemporaine du Québec. At the helm of the SMCQ, he made his teenage dream come true: 19 Quebec composers were recruited to implement the “toutpartoutphonie” that Boudreau had initiated with a concert by his colleague Denys Bouliane.

No less than 15 ensembles with 333 musicians, a carillon, a large organ, 2000 bell-ringers, two fire trucks and 15 church steeples were then called upon to perform before a crowd worthy of the great pop festivals. One thing is certain, it was by far the most unifying contemporary music happening ever presented in Quebec, if not in Canada.

Why such a deployment? Before making so-called serious music, Boudreau had come up in the golden age of counterculture and psychedelia, hence the band Infonie, of which he was the eminent leader, a formidable musical laboratory at the confluence of current jazz, rock, contemporary and modern music of classical tradition. This explains the composer’s fascination with the great countercultural events of his generation and his desire to plunge a mass audience into contemporary music, which at the time was considered austere and inaudible by the conservative minds of the small Quebec community and other backward pontiffs of our contemporary culture.

As was almost always the case with contemporary music at the time, the event triggered a torrent of nonsense from reactionary critics (no need to name them) and a flood of enthusiasm among open-minded music lovers.

“I don’t pretend that the Symphonie was loved by everyone, let alone that the composers involved achieved their life’s work,” said Boudreau, interviewed by La Presse the day after the performance. “I’m certain of one thing, however – La Symphonie du millénaire has captured the imagination, it has appealed to the majority of the audience, because they are culturally omnivorous. I too love blues and even heavy metal, but, more particularly, contemporary music. I know that this event gave us enough meat to go out and get a large audience. Our music is much more accessible than we think, it just needs to be presented in a context that encourages openness and discovery.”

No broadcaster at the time, including the Canadian Broadcasting Corporation, had bothered to capture this historic event on television. Filmmakers had nevertheless agreed to film on a volunteer basis, but no documents have been made public to date. It seems that a complex montage was necessary, given the relative quality of the images. We’re still waiting for the results.

In any case, “we have demonstrated the openness and intelligence of people, which many cultural and media decision-makers refuse to acknowledge,” Boudreau concluded. He thinks no less the same today.

What’s next? “Unfortunately, it would cost hundreds of thousands of dollars to finance the public release of this recording,” Boudreau sighs, “it’s a question of copyright and performance royalties. Who can finance such an undertaking?”

The master tape of this historic recording sleeps peacefully on a CBC radio-dept. shelf. The work resurfaced on stage in a reduced format in 2017, as part of the SMCQ’s 50th anniversary, and… we still don’t know when and how the recording of this “toutpartoutphonique” work will be released to the public. Frustrating!