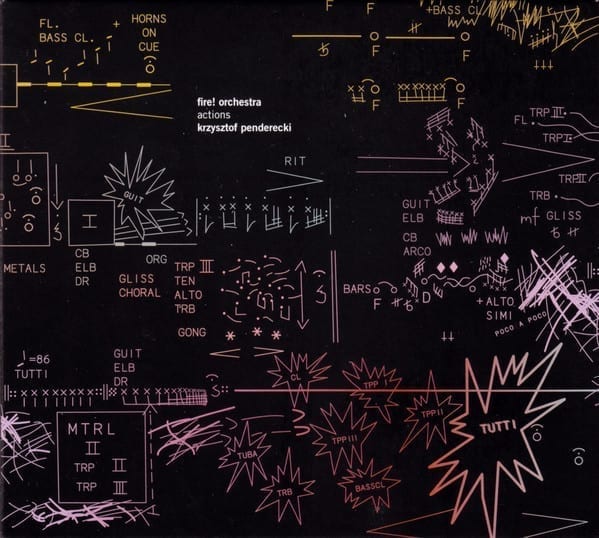 Composer and conductor Krzysztof Penderecki, certainly one of the most prominent musicians of the last six decades, died recently of “a long illness” that apparently had nothing to do with COVID-19.

PAN M 360 pays homage to this towering Polish artist whose influence has extended beyond contemporary music of Western origin, through adaptations of his works for film and television – The Exorcist, The Shining, Wild at Heart, Shutter Island, Twin Peaks, etc. It was also Penderecki himself who (quite) recently conducted a symphony orchestra in the performance of the famous Symphony No. 3 by his late compatriot Henryk Gorecki, whose soloist was none other than Beth Gibbons (Portishead). We also know that Jonny Greenwood (Radiohead) worked with the composer in 2012, which was significant for the musician, who was then in the process of mastering contemporary orchestral language.

A composer since childhood, Penderecki has composed more than 150 works for classical performers and also avant-garde musicians, including eight symphonies, four operas, some 20 concertos, some 15 pieces for solo instruments, more than 15 for chamber orchestras and more than 30 for choral singing.

The first phase of his compositional life was devoted to serial music, thus atonal and post-dodecaphonic. It was said at the time to be dependent on the orchestral aesthetics developed by Anton Webern and Pierre Boulez, from two different generations. Thus it was part of the dominant contemporary movement of its time, that is to say until the mid-’70s.

This formal body of work was informed by a strong Christian fervour, as witnessed by his St. Luke Passion (1965-66), a key work that the Montreal Symphony Orchestra performed in the summer of 2018, under the direction of Maestro Nagano, at the Lanaudière Festival, as well as in Krakow, Poland, and at the famous Salzburg Festival in Austria.

The composer courteously granted an interview to La Presse; at the end of the phone call with this writer, the vitality of his voice and his liveliness of spirit offered no hint that he would move on to another dimension less than two years later.

Penderecki perfectly engaged the paradox between contemporary music and sacred music, present throughout his entire oeuvre from the 1950s onwards (Psalms of David), even in its most experimental phases.

“Sacred music was forgotten, which is no longer the case. Numerous Passions, it must be said, have been written in the history of music. I am delighted that mine is alive and well. It is considered my most important work, but I believe that others are of equal quality – for example, Utrenja (1970-1971) or Symphony No. 7, known as Seven Gates of Jerusalem (1996).”

This simultaneous assumption of Christian faith and of the most avant-garde musical forms of his time is remarkable in this exceptional composer, who also gradually reintegrated Romanticism and post-Romanticism into his approach, without it being anachronistic for all that.

“My music,” he said, “must first of all be connected to the emotions. It is also important for me to avoid unnecessary complications that disengage the listener or force them to overanalyze while listening. To captivate the listener, you need formal clarity, harmonic clarity.” (Alain Brunet)

All the more reason to pay this modest tribute to him and perhaps introduce his work to music lovers who have not yet experienced his colossal work.

Wishing to collaborate with musicians from outside the realm of classical music, Penderecki composed Actions for Free Jazz Orchestra, a work performed in 1971 by the New Eternal Rhythm Orchestra under the direction of Don Cherry. The ensemble – whose members included Peter Brötzmann, Terje Rypdal, Tomasz Stanko and Kenny Wheeler, among others – played explosive music in which the dissonance owed as much to free-jazz improvisation as to the contemporary music that Penderecki was advocating at the time. The composer intended to continue the adventure, but it was not followed up.

Taking up the torch, the Fire! Orchestra led by Swedish composer Mats Gustaffson has just released a new version of Actions on the Rune Grammofon label. Gustaffson has considerably reduced the pace of the composition, from 17 to 40 minutes. Played this way, it evokes at times the oppressive music of Penderecki that was used in the films of Kubrick, Friedkin and Lynch. The circle is complete. (Steve Naud)

The Polish composer Krzysztof Penderecki is a kind of free electron in the world of contemporary music. Through the use of serial processes, graphic notation and indeterminacy, his early works, like those of Henryk Gorecki, were part of an avant-garde movement not only in Poland but across Europe. Nevertheless, like his compatriot, his language later “softened” and he gave the impression of taking refuge in the music of the past. That said, the composer never denied the artistic and spiritual baggage bequeathed to him by his predecessors. His St. Luke Passion, written in 1966, is an excellent example of this synchronization between tradition and evolution.

This monumental work, composed to commemorate the 700th anniversary of Münster Cathedral, was a real tour de force at the time, both in terms of the numbers required and the concept itself. Writing a religious work, a passion moreover, was a very daring gesture on the part of the young composer. It is a powerful, poignant, disturbing, extremely dramatic and resolutely moving work. Among the few existing recordings, the one headed by Penderecki himself is a reference. The reverberation of Christ the King Cathedral in Katowice gives this Passion a grandiose dimension, and the performers offer an effective and heartfelt vision of this essential work of religious music of the last 60 years. (François Vallières)

Although his body of work is considerable, Penderecki will forever be associated for me with one piece, his Threnody for the Victims of Hiroshima, in which 52 string players (24 violins, 10 violas, 10 cellos and eight double basses) engage in incessant and strident microtonal glissandi. From the outset, one has the impression of finding oneself in the middle of a beehive in full flight, then in a city where the air-raid sirens sound, not to mention the subsequent roar of airplane engines.

I know it’s supposed to make the listener feel all sorts of agony, but the effect of this music on me as a dissonance-loving listener is more one of fascination. My reference recording: the National Polish Radio Symphony Orchestra conducted by Antoni Wit, made in 1998, and released on Naxos.

After the premiere of his Symphony No. 7 in 1996, followed by that of his Symphony No. 8 in 2005, there was something mysterious about the absence of the Sixth in the composer’s repertoire. So here it is at last, in a first recording made two years after its premiere by the Guangzhou Symphony Orchestra in 2017, twelve years after the Eighth, Songs of Transience, in which it also finds its genesis. Strongly inspired by Hans Bethge’s collection of texts, Die chinesische Flöte, from which he had used an excerpt in the latter, the composer first composed Three Chinese Songs in 2008, and then added five more texts by Chinese poets found in Bethge’s collection to what became his Symphony No. 6, Chinese Poems, for baritone and orchestra. While he was inspired by the same collection of texts as Mahler for his Song of the Earth, Penderecki is, at 27 minutes, more concise than his illustrious colleague and less expansive, too, on the orchestral side, although he does add interludes played by the solo erhu (Joanna Kravchenko). The latter recalls the composer’s taste for what might be called “exotic” sounds, but the fact remains that we are probably closer here to Mahler than to  the “noise” of Threnody for the Victims of Hiroshima, composed at a time when Penderecki was compared to Xenakis. The composer’s delight in playing with the colours of sound is evident in this Clarinet Concerto of 1995, which was previously a cello concerto (1989) and, initially, a viola concerto (1983). The work carries a strong romantic charge that conductor Wojciech Rajski transmits with sensitivity. As for the soloist, he traverses this virtuoso score with ease, with a nod to Gershwin included. (Réjean Beaucage)