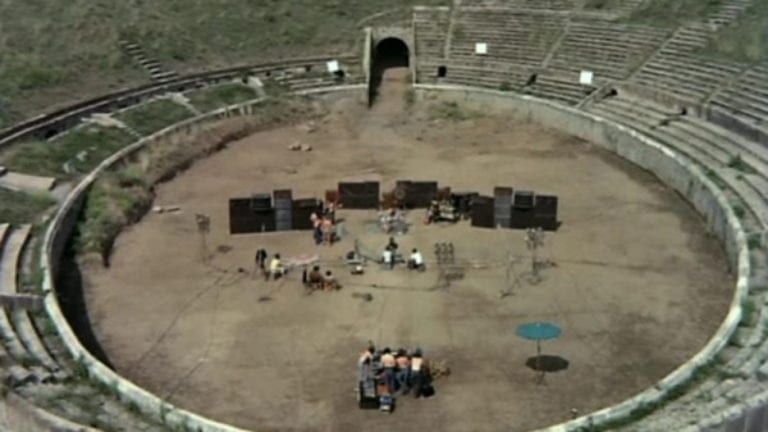 Pastime for the End Times: Pink Floyd, Live at Pompeii (1972)

For an audience of music lovers with no concerts to attend, we suggest a concert with no audience – the English prog-rock superstars at their peak, in the phantom city’s ruined Roman amphitheatre.

Confined to your apartment, no chance of enjoying live music in the flesh anytime soon, beset by the twin demons of apocalyptic doom and irritable boredom… allow us to prescribe a partial remedy, one that captures the concert experience (at a couple of steps of removal), alleviates ennui, and makes monumental existential dread seem kinda cool.

For an audience of music lovers with no concerts to attend, we suggest a concert with no audience – other than the production crew, the ghosts of the dead, and perhaps several species of small furry animals. Filmed over four days in October 1971, in the center of the phantom city’s ruined Roman amphitheatre (with some additional material shot in a Paris television studio, two months later), Pink Floyd: Live at Pompeii sees the English prog-rock superstars at their peak, on the cusp of the magnificent LP Meddle hitting the shelves.

Live at Pompeii is bookended by a bisected version of that album’s epic, 23-minute finale, “Echoes”. Sadly, the film can’t be found on any streaming service, and exists in physical media format only as a DVD, released in 2002 and available on Amazon. Extracts exist on YouTube, however, so we’ll start with the first half of “Echoes”.

A charming, prosperous, culturally lively city, Pompeii was suddenly destroyed in the eruption of Mount Vesuvius in the Year of our Lord, 79. Its citizens, along with their hopes, dreams, and cherished memories, were lost in the sands of time – which is a nice way of saying, an approximately five-metre dump of red-hot, lung-scorching volcanic ash. Harsh tokes, there, eh!

Anyway, modern archaeologists have uncovered a vast trove of sociological and cultural treasures in the ruins of Pompeii, a myriad of mosaics, reliefs, and frescoes, feverish invocations of Eros and Thanatos. These amounted to invaluable resources for scholars of antiquity, and more importantly, cool filler content for director Adrian Maben when the close-ups on the flabby, pasty, pot-addled quartet got tiresome.

Also, there is a gong. Watch here as bassist Roger Waters shows that gong who’s the boss.

This could be argued, but the high point of the concert film comes halfway though. The most memorable moment of Meddle is the menacing, propulsive “One of These Days”, and it’s drummer Nick Mason’s moment to shine. He doesn’t, really, in the Pompeii footage, possibly because he’s high as a kite. Regardless, this bit is awesome.

One of These Days

Pink Floyd set a cool prog-rock precedent with Live at Pompeii. Germany’s Tangerine Dream toured a series of European cathedrals in the mid-’70s, cocooning themselves in little fortresses of analog synths and offering krautrock prayers to the elder gods of future times now forgotten. Their 1975 set at England’s garishly gothic Coventry Cathedral was filmed, the footage stewed in primordial digital effects, and the hilariously hallucinatory results broadcast on Britain’s BBC2 in 1976.

Bearing even greater similarities to Pink Floyd’s necropolitan field trip is Alturas de Machu Picchu, broadcast on Chile’s Canal 13 and Peru’s Radio Televisión Peruana in 1981. Los Jaivas were the kings of South American prog, incorporating Andean folk music and cosmic freak jams with equal enthusiasm. The Chilean band set up shop in the famous mountaintop ruins of the “Lost City of the Incas”, and lip-synched their way through their latest album, a musical rendition of their national icon Pablo Neruda’s poem. Celebrated author Mario Vargas Llosa introduced the affair. The full program pops up on YouTube occasionally, only to be pulled pretty quickly. Here’s a highlight, though, the grandiose “La Poderosa Muerte”.

To wrap things up, we return to Pompeii. Here’s the second half of “Echoes”. Enjoy.